The San Francisco Arts Commission is working on behalf of Treasure Island Development Authority to commission a monumental public artwork for Waterfront Plaza, which is to be located on Avenue of the Palms by the causeway entrance of Treasure Island. The newly commissioned artwork is intended to be a beacon and mark an important point of entry to the island, greeting residents and visitors upon their arrival. This work will have an iconic presence and be grand and bold. It will be visible from the Bay and the San Francisco shoreline and will respond to the unique vantage points from which it will be viewed. Three artists were chosen as finalists by a Public Art Selection Panel to create site-specific proposals for the Waterfront Plaza opportunity: Ai Wei Wei, Antony Gormley, and Jorge Pardo. 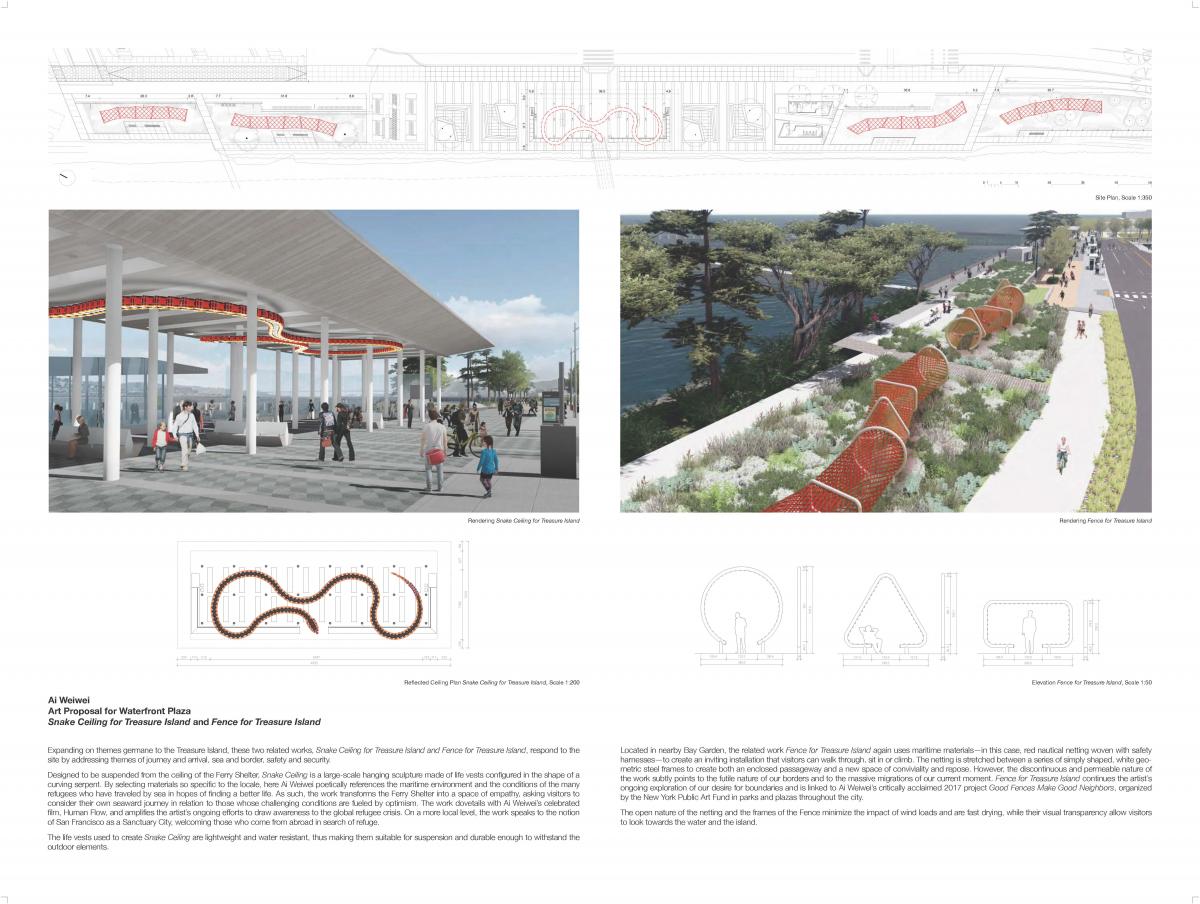 Designed to be suspended from the ceiling of the Ferry Shelter, Snake Ceiling is a large-scale hanging sculpture made of life vests configured in the shape of a curving serpent. By selecting materials so specific to the locale, here Ai Weiwei poetically references the maritime environment and the conditions of the many refugees who have traveled by sea in hopes of finding a better life. As such, the work transforms the Ferry Shelter into a space of empathy, asking visitors to consider their own seaward journey in relation to those whose challenging conditions are fueled by optimism. In this way, the work dovetails with Ai Weiwei’s celebrated film, Human Flow, and amplifies the artist’s ongoing efforts to draw awareness to the global refugee crisis. On a more local level, the work speaks to the notion of San Francisco as a Sanctuary City, welcoming those who come from abroad in search of refuge.

The life vests used to create Snake Ceiling are lightweight and water resistant, thus making them suitable for suspension and durable enough to withstand the outdoor elements.

Located in the nearby Bay Garden, the related work Fence for Treasure Island again uses maritime materials—in this case, red nautical netting woven with safety harnesses—to create an inviting installation designed to engage the public in a variety of ways—an artwork that visitors can walk through, sit in or climb. The netting is stretched between a series of simply shaped, white, geometric steel frames to create both an enclosed passageway and a new space of conviviality and repose. However, the discontinuous and permeable nature of the work is meant to subtly echo associations raised by the Snake Ceiling, suggesting the futile nature of our borders and pointing again to the massive migrations of our current moment. Fence for Treasure Island continues the artist’s ongoing exploration of our desire for boundaries and is linked to Ai Weiwei’s critically acclaimed 2017 project Good Fences Make Good Neighbors, organized by the New York Public Art Fund in parks and plazas throughout the city.

The open nature of the netting and the frames of Fence minimize the impact of wind loads and are fast drying, while their visual transparency allow visitors to look towards the water and the island. 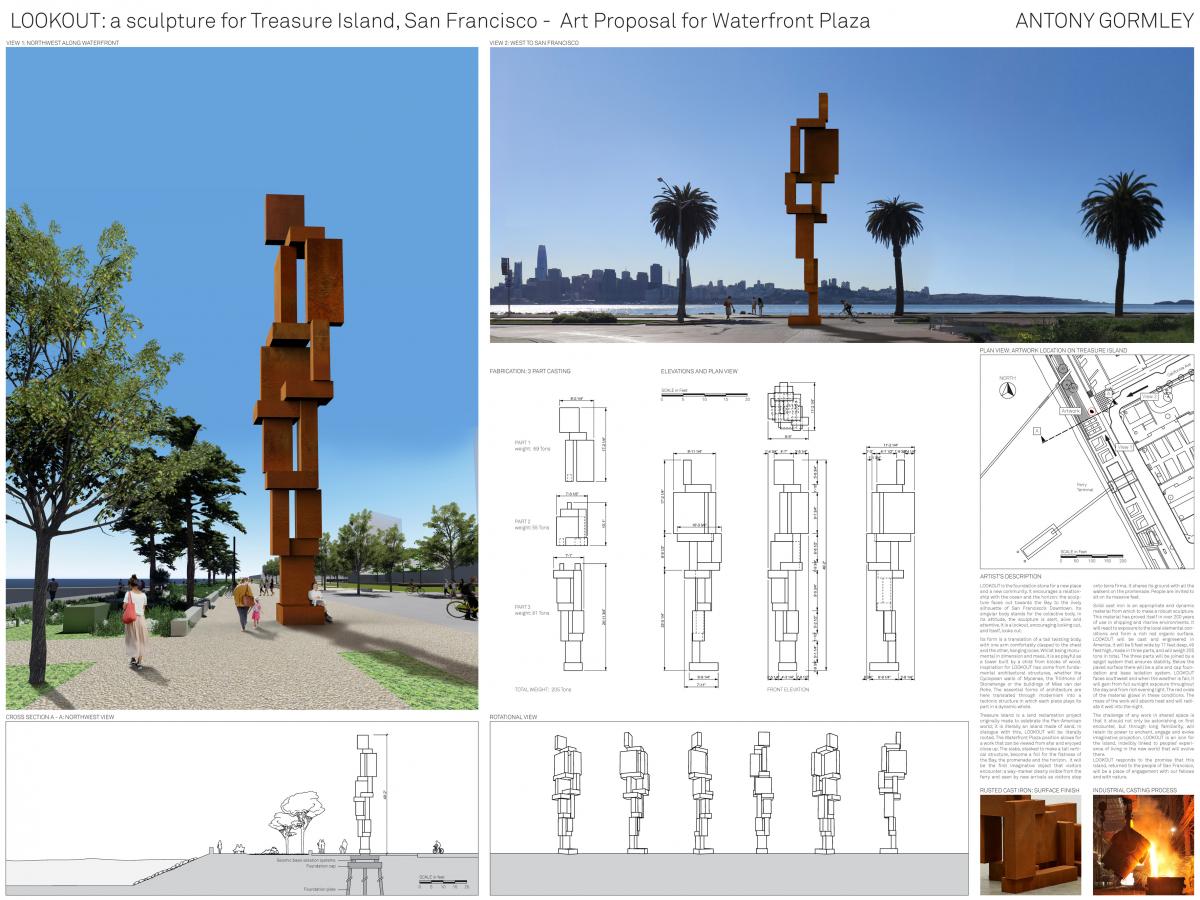 LOOKOUT is the foundation stone for a new place and a new community. It encourages a relationship with the ocean and the horizon: the sculpture faces out towards the Bay to the lively silhouette of San Francisco’s Downtown. Its singular body stands for the collective body; it is offered in the spirit of a friendly contribution to the neighborhood and will accompany its growth. In its attitude, the sculpture is alert, alive and attentive. It is a lookout, encourages looking out and itself looks out.

Its form is a translation of a tall twisting body, with one arm comfortably clasped to the chest and the other, hanging loose. Whilst being monumental in dimension and mass, it is as playful as a tower built by a child from blocks of wood. Individual representation is replaced by the overall feel or set of the body, using a bold, simple and stable structure to celebrate the relationship between body and ground.

The sculptural language is derived from the ‘Blockworks’ series that I have been developing over 20 years, which tries to physicalize the pixel. Over time, the blocks have become increasingly bolder and larger. The mutual relationship of these bigger blocks has become more playful, allowing cantilever, propping, and pier and lintel construction. The work demands a certain engagement with the interplay of masses in creating the balance of form and feeling. In a time of increasing mobility and virtuality, this mass of material insists on first-hand experience.

Inspiration for LOOKOUT has come from fundamental architectural structures, whether the Cyclopean walls of Mycenae, the Trilithons of Stonehenge, or the buildings of Mies van der Rohe. The essential forms of architecture are here translated through modernism into a tectonic structure, in which each piece plays its part in a dynamic whole.

Treasure Island is a land reclamation project originally made to celebrate the Pan-American world; it is literally an island made of sand. In dialogue with this, LOOKOUT will be literally rooted. The Waterfront Plaza position on the axis of California Avenue is the perfect site for a work that can be viewed from afar and enjoyed close up. The slabs, stacked to make a tall vertical structure, become a foil for the flatness of the Bay, the promenade and the horizon. It will be the first imaginative object that visitors encounter; a way-marker clearly visible from the ferry to the left side of the terminal and seen by new arrivals as visitors step onto terra firma. Though tall, it has no plinth and shares its ground with all the walkers on the promenade. People are invited to sit on its massive feet. The effect of being close enough to touch the vast slabs of cast iron, this concentrated earth material, is powerful.

Solid cast iron is an appropriate and dynamic material from which to make a robust sculpture for Treasure Island. This material has proved itself in over 200 years of use in shipping and marine environments. On this scale, it will last more than 1000 years. It will react to exposure to the local elemental conditions and form a rich red organic surface, needing no maintenance.

The iron slab construction allows us to make a sculpture at scale and mass with achievable engineering. LOOKOUT will be cast and engineered in America. It will be 9 feet wide by 11 feet deep, 49 feet high, made in three parts, and will weigh 205 tons in total. The three parts will be joined by a spigot system that ensures stability. Below the paved surface there will be a pile and cap foundation, anticipated to consist of a cap of 12 by 12 by 2.5 feet deep, and 8 battered piles, 14 inches in diameter to a depth of 80 feet. Additionally, the foundation will include a base isolation system that will mitigate any future seismic movement. The foundations will not be visible.

In the context of this man-made island and an increasingly digital world in which the Bay Area plays its part, this expression of dependency on the earth and rootedness within the elemental is perhaps useful. The work will persist in the vicissitudes of time and tectonic activity. Whether in the bright sunlight of a spring day, or on an afternoon of sea mist spreading across the Bay, it talks of our determination to construct a habitat while simultaneously being engaged with the elemental. LOOKOUT faces southwest and when the weather is fair, it will gain from full sunlight exposure throughout the day and from rich evening light - perhaps one of the most beautiful times to be in the Bay. The red oxide of the material glows in these conditions. The mass of the work will absorb heat and will radiate it well into the night.

Gazing out towards sea and the city, to its future and beyond, to all that is happening around the Pacific, I want the work to carry a sense of confidence about its part in the future and its ability to endure. The challenge of any work in shared space is that it should not only be astonishing on first encounter, but through long familiarity, will retain its power to enchant, engage and evoke imaginative projection. LOOKOUT is an icon for the island, indelibly linked to peoples’ experience of living in the new world that will evolve there.

LOOKOUT responds to the promise that this island, returned to the people of San Francisco, will be a place of engagement with our fellows and with nature. 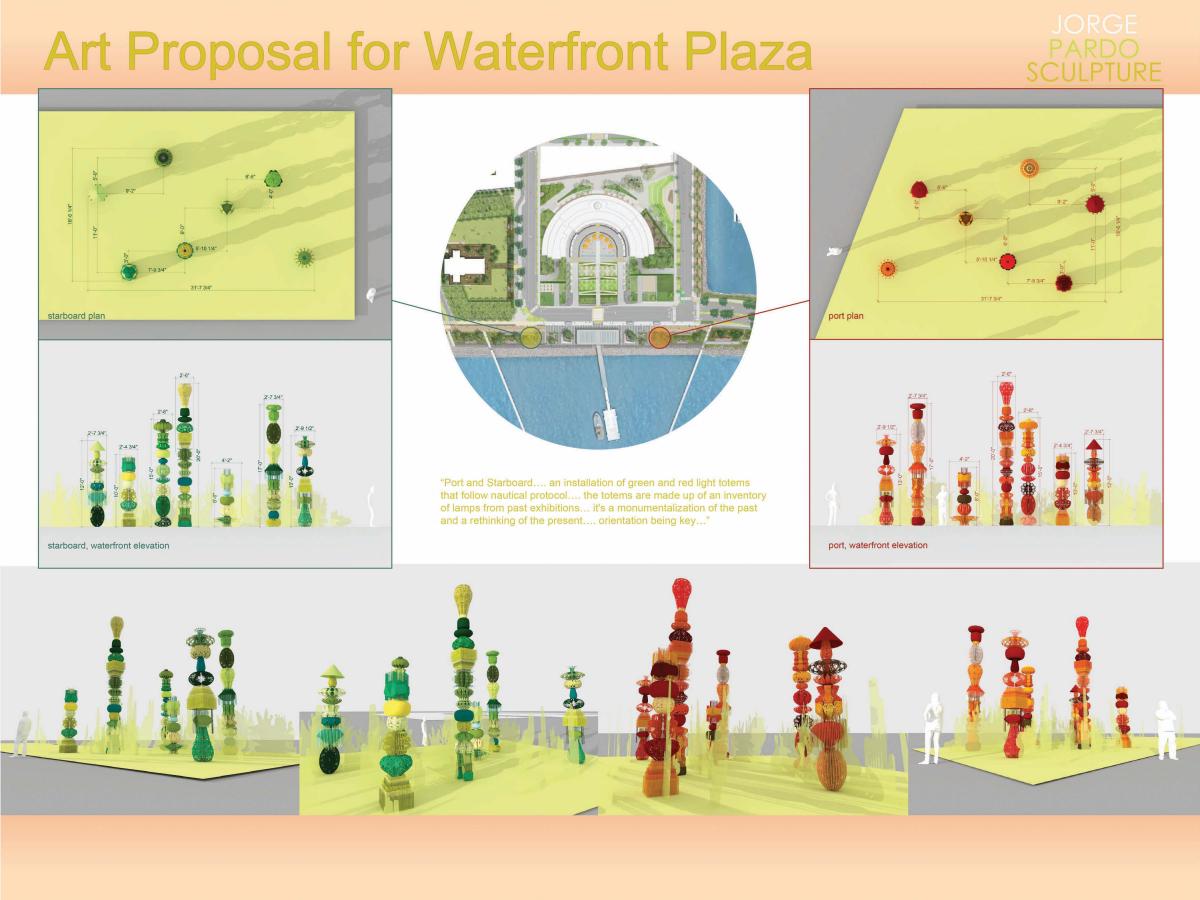 “Port and Starboard…. an installation of green and red light totems that follow nautical protocol…. the totems are made up of an inventory of lamps from past exhibitions… it's a monumentalization of the past and a rethinking of the present…. orientation being key…”

The two Bay Garden sites flanking the Ferry Terminal have been chosen for the proposed light totem sculptures.

There are a total of 14 light sculptures; seven in each garden ranging from 8’ tall to 20’ tall with an average diameter of 2’6”. The light sculptures could be fabricated from steel or aluminum, which would then be sealed in multi-colored weather proof powder coating.

The sculptures would be highly visible due to their scale and color, however will not be physically accessible as they are located within dense succulent plantings that would be curated by the artist with the assistance of landscape professionals.