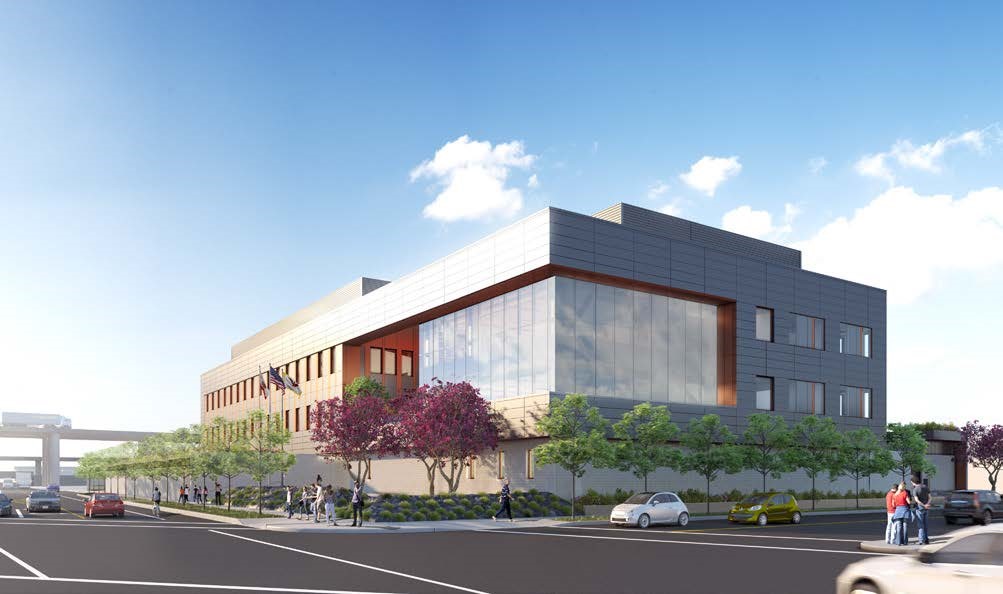 The San Francisco Arts Commission is conducting a selection process to choose an artwork for new Traffic Company and Forensic Science Division building, which will be located at at the intersection of Evans Avenue and Toland Street. The facility will be shared by the San Francisco Police Department’s Traffic Company and Forensic/CSI Division. The goal is to create a signature artwork for the new building that will inspire and engage both its users and the public, and will enhance the building’s connection to the surrounding neighborhood. Four artists were chosen as finalists by a Selection Panel to create site-specific proposals for the new Traffic Company and Forensic Science Division building: Alice Aycock, Linda Fleming, Lead Pencil Studio, and Susan Narduli. 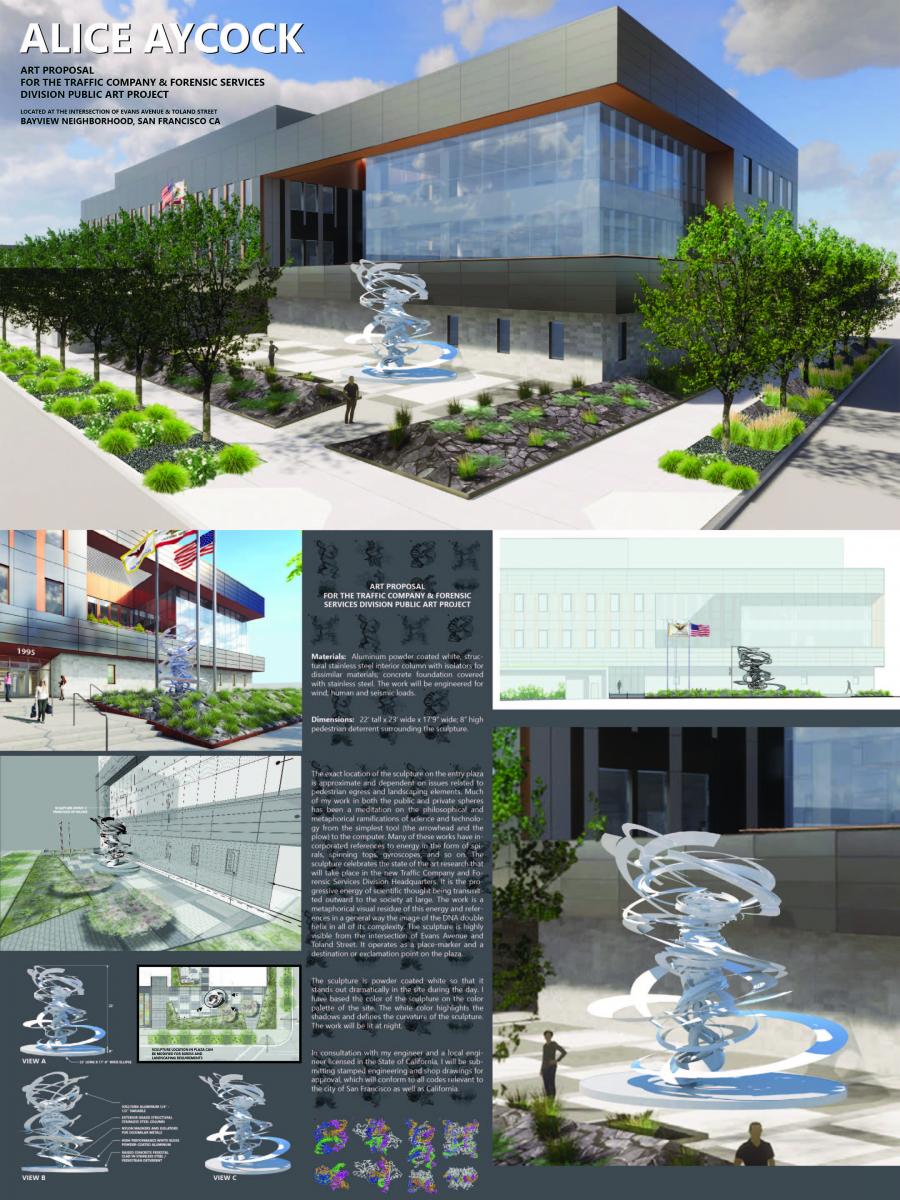 The exact location of the sculpture on the entry plaza is approximate and dependent on issues related to pedestrian egress and landscaping elements. Much of my work in both the public and private spheres has been a meditation on the philosophical and metaphorical ramifications of science and technology from the simplest tool (the arrowhead and the plow) to the computer. Many of these works have incorporated references to energy in the form of spirals, spinning tops, gyroscopes, and so on. The sculpture celebrates the state of the art research that will take place in the new Traffic Company and Forensic Services Division Headquarters. It is the progressive energy of scientific thought being transmitted outward to the society at large. The work is a metaphorical visual residue of this energy and references in a general way the image of the DNA double helix in all of its complexity. The sculpture is highly visible from the intersection of Evans Avenue and Toland Street. It operates as a place-marker and a destination or exclamation point on the plaza.

The sculpture is powder coated white so that it stands out dramatically in the site during the day. I have based the color of the sculpture on the color palette of the site. The white color highlights the shadows and defines the curvature of the sculpture. The work will be lit at night.

In consultation with my engineer and a local engineer licensed in the State of California, I will be submitting stamped engineering and shop drawings for approval, which will conform to all codes relevant to the city of San Francisco as well as California. 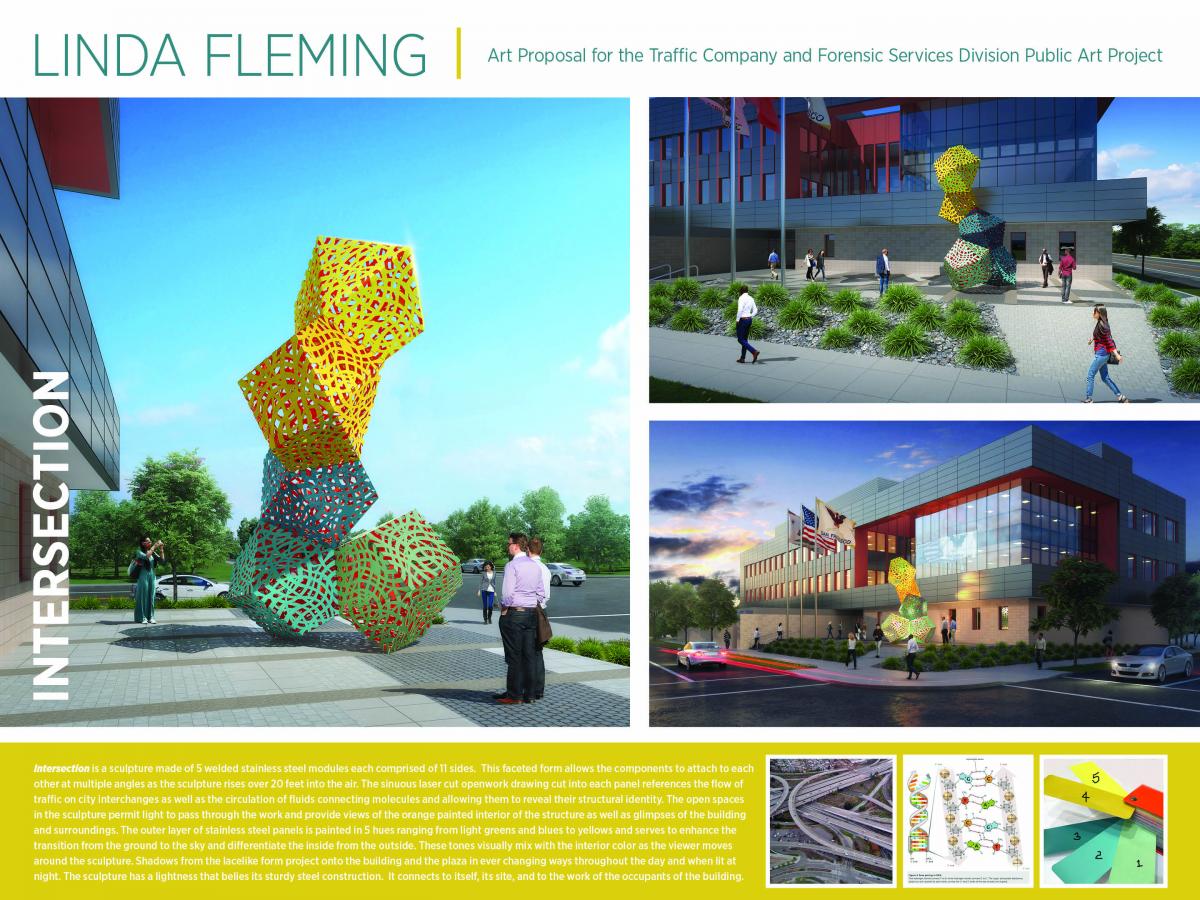 Intersection is a modular sculpture comprised of faceted forms that allow the components to attach to each other at multiple angles as the sculpture rises  over 20 feet into the air. The sinuous laser cut openwork drawing cut into each panel references the flow of traffic on city interchanges as well as the circulation of fluids connecting molecules and allowing them to reveal their structural identity. The open spaces in the sculpture permit light to pass through the work and provide views of the orange painted interior of the structure as well as glimpses of the surroundings. The outer layer of stainless steel panels are painted in 5 hues ranging from light greens and blues to yellows and serves to differentiate the inside from the outside while the two tones mix in the eye from a distance. Shadows from the lacelike form project onto the building and the plaza in ever changing ways throughout the day and when lit at night. The sculpture has a lightness that belies its sturdy steel construction.  It connects to itself, its site, and to the work of the occupants of the building.

Materials and structure
The 5 modules will be made of welded .25 inch stainless steel plate.  Each module is comprised of 11 flat planes that are laser cut with drawings that traverse the planes of each component and carry through onto the other forms where the modules intersect providing continuous lines throughout the sculpture.  Holes are laser cut into the planes of the stainless steel structure and these allow the forms to be bolted to each other as well as allow a skin to be bolted to the outside surface.  The outside skin will be 1/8” stainless steel painted or powder coated with the best coating materials in variations of pale greens, pale blues, and yellows allowing a transition from bottom to top.   The interior stainless steel structure will be painted in a rich orange color so that the warm interior hue will mix with the other colors in the eye and provide a constantly changing pallet as the viewer moves around the sculpture. 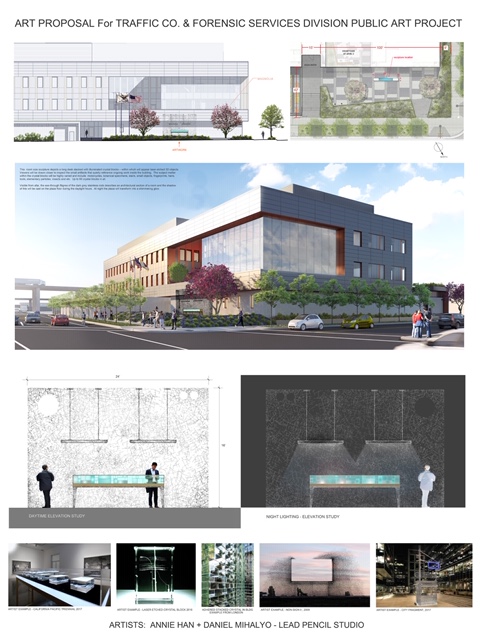 Illuminated Room is a combination of an architectural section of a room and everyday objects used and examined by the Traffic Company and Forensic Services Division.  These familiar objects will be etched into solid optical crystal blocks from digital LiDAR scans using a laser etching machine.  In turn, these blocks will be stacked atop a bronze table with internal illumination.  Overall, this large-scale sculpture will work as a translucent enclosure where viewers will be drawn to inspect the small artifacts that reference ongoing work inside the building.  The subject matter within the crystal blocks will be highly varied and include cars, motorcycles, botanical specimens, stairs, small objects, fingerprints, hair, tools, elementary particles, insects and etc.   These crystals in the center of the sculpture will be internally lit and serve as an ambient light source within the public plaza at night.

This proposal focuses on our ongoing sculptural practice based on architecture and LiDAR-based work.  By incorporating the visual language of building sections we are exploring the idea of the architectural enclosure and how it effects our spatial perception.  Combining the intricate filigree sculpture and LiDAR imbedded images in glowing crystals, Illuminated Room will transform the plaza to an engaging encounter for the public on multiple scales, layers and views – both daytime and night.

The unique structural fabrication technique that we have developed over the last decade of redundant welded wire, is both translucent and visually ever-changing based on viewer’s perspective.  Using the repeated and overlapped welding points as the means to construct a form, the sculpture will be lightweight, elegant and incredibly strong without the bulk and weight of the solid mass.  Visible from afar, the see-through structure will cast a drawing of a room on plaza and sidewalk during the daylight hours and it will transform into a shimmering glow in the evening. 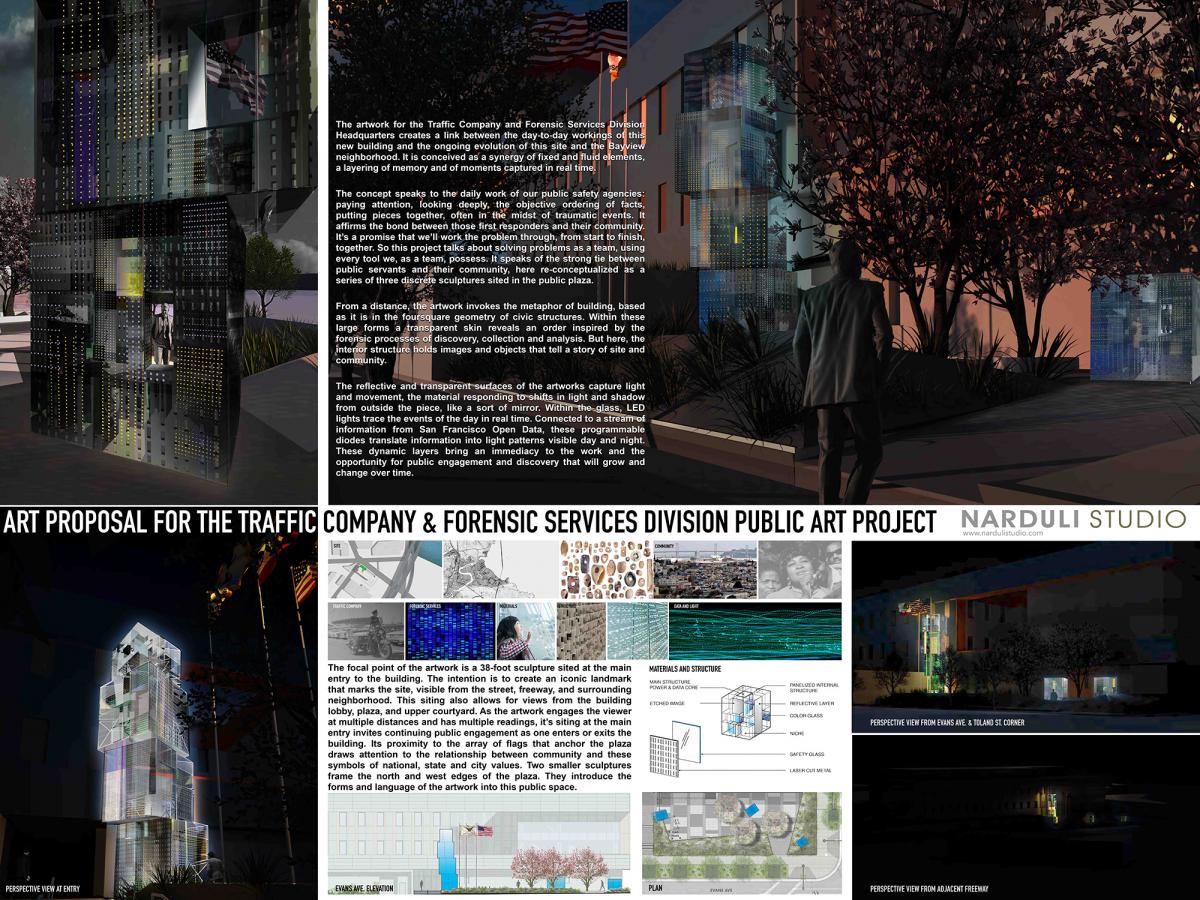 The artwork for the Traffic Company and Forensics Services Division Headquarters creates a link between the day-to-day workings of this new building and the ongoing evolution of this site and the Bayview neighborhood. It is conceived as a synergy of fixed and fluid elements, a layering of memory and of moments captured in real time.

The concept speaks to the daily work of our public safety agencies: paying attention, looking deeply, the objective ordering of facts, putting pieces together, often in the midst of traumatic events. It affirms the bond between those first responders and their community. It’s a promise that we’ll work the problem through, from start to finish, together. So this project talks about solving problems as a team, using every tool we, as a team, possess. It speaks of the strong tie between public servants and their community, here re-conceptualized as a series of three discrete sculptures sited in the public plaza.

From a distance, the artwork invokes the metaphor of building, based as it is in the foursquare geometry of civic structures. Within these large forms a transparent skin reveals an order inspired by the forensic processes of discovery, collection and analysis. But here, the interior structure holds images and objects that tell a story of site and community.

The reflective and transparent surfaces of the artworks capture light and movement, the material responding to shifts in light and shadow from outside the piece, like a sort of mirror. Within the glass, LED lights trace the events of the day in real time. Connected to a stream of information from San Francisco Open Data, the programmable diodes translate information into light patterns visible day and night. These dynamic layers bring an immediacy to the work and the opportunity for public engagement and discovery that will grow and change over time.

In its interior surfaces and textures and in the half-hidden objects that give context and insight. Like a puzzle, the fragments of history, memory, color, site, shifting perspectives and human engagement call out to be assembled.

Sometimes, glancing at it as they enter or leave the building, people will notice panes that reflect the sky, or bits of the surrounding landscape, or fragments of their own visages and persons. Sometimes, pausing to look more intently, they’ll discern objects partially or fully revealed inside. Some will be immediately identifiable as artifacts from the surrounding community’s past life; some will be just glimpsed, harder to identify, questions in physical form. This layering of the familiar and surprise is an invitation to reimagine and a metaphor for thought, memory, public service and community.

The focal point of the artwork is a 38-foot sculpture sited at the main entry to the building. The intention is to create an iconic landmark that marks the site, visible from the street, freeway, and surrounding neighborhood. This siting also allows for views from the building lobby, plaza, and upper courtyard. As the artwork engages the viewer at multiple distances and has multiple readings, it’s siting at the main entry invites continuing public engagement as one enters or exits the building. Its proximity to the array of flags that anchor the plaza draws attention to the relationship between community and these symbols of national, state and city values. A significant separation allows for ample space for ceremonial events at the array.

Two smaller sculptures frame the north and west edges of the plaza. They introduce the forms and language of the artwork into this public space. One sculpture within the circle of deciduous magnolia trees will capture the beauty of the cycles of nature in its reflective facets and allow for a more contemplative experience of the artwork. At the site’s prow where the plaza meets the corner, the other engages the streetscape and presents an unexpected and welcoming experience for pedestrians and vehicles.

Formally, the artwork references the large blocks of transparent and solid elements of the architectural design. Like the building, the sculpture is grounded in a strong base and transitions to become lighter and more transparent as it rises, allowing for views into and through an interior narrative. Sited at the front entry of this new civic building, the transparency of the artworks emphasizes the larger civic vision of transparency in action and connection to community.

View a larger image of the proposal.

Please take a few minutes to review the proposals on display here and complete a comment form below. You may also email your comments to sfacpublicartcomment@sfgov.org, or hand deliver/mail comments to 401 Van Ness Avenue, Room 325 by March 13, 2019, 5 p.m.