Public Comment
View the Proposals
The San Francisco Arts Commission held a selection process to choose an artist to produce a two-dimensional artwork for the Margaret Hayward Playground Community Building. The goal of the project is to create a signature artwork for the renovated Margaret Hayward Playground that will inspire and engage the site users and enhance their connection to recreation and to the neighborhood. Emory Douglas was selected to create site-specific work for this opportunity. 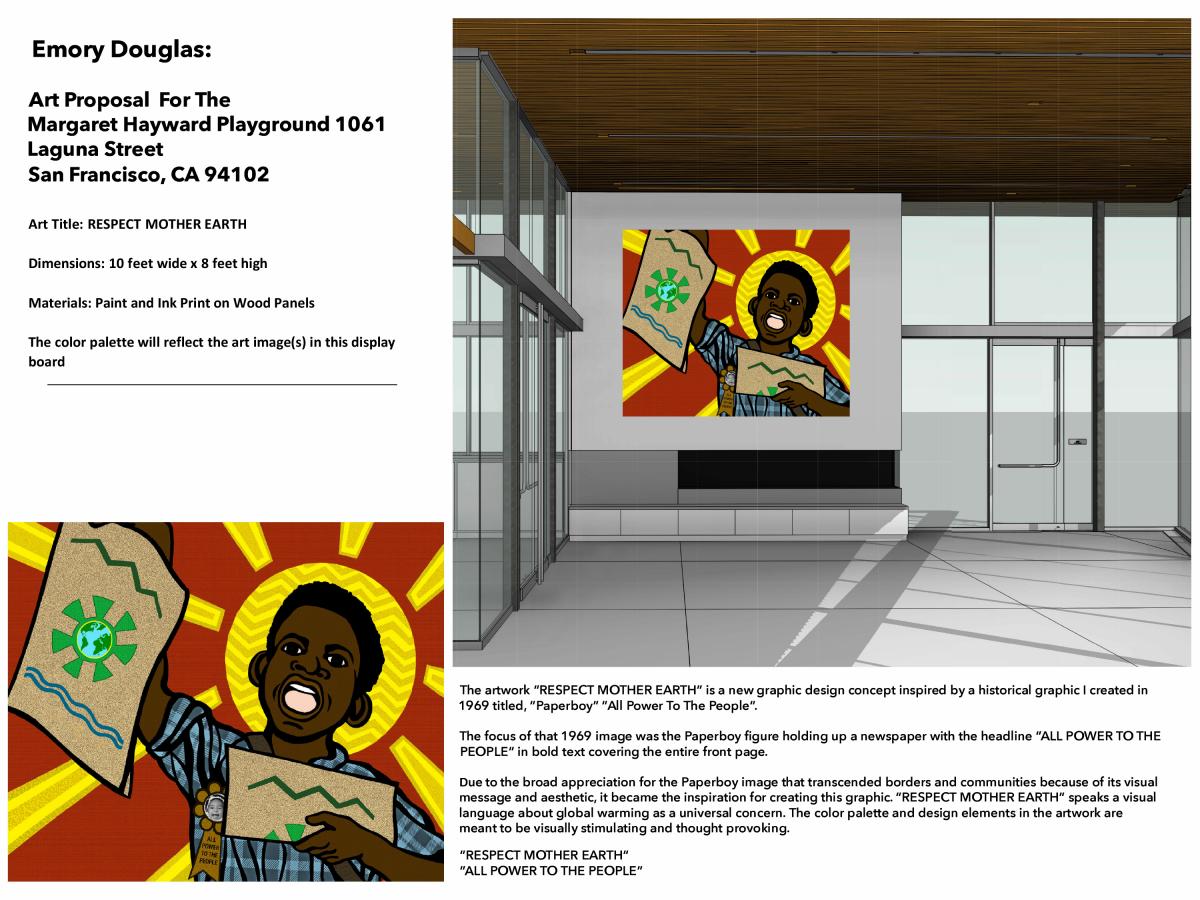 The artwork RESPECT MOTHER EARTH is a new graphic design concept inspired by a historical graphic I created by Emory Douglas 1969 titled, Paperboy, All Power To The People.

The focus of that 1969 image was the Paperboy figure holding up a newspaper with the headline ALL POWER TO THE PEOPLE in bold text covering the entire front page.

Due to the broad appreciation for the Paperboy image that transcended borders and communities because of its visual message and aesthetic, it became the inspiration for creating this graphic. RESPECT MOTHER EARTH speaks a visual language about global warming as a universal concern.

The color palette and design elements in the artwork are meant to be visually stimulating and thought provoking.

ALL POWER TO THE PEOPLE​

Emory Douglas was born in 1943 in Grand Rapids, Michigan, and has been a resident of the Bay Area since 1951. He became the Minister of Culture for the Black Panther Party in 1967, a role he held until the party disbanded in the early 1980s. During the Party’s active years he served as the art director overseeing the design and layout of the Black Panther, the Party’s weekly newspaper. Douglas was trained as a commercial artist at City College of San Francisco and has been the subject of several solo exhibitions. His work has also been in numerous exhibitions about the history of the Black Panther Party, including shows at the Arts & Culture Conference of the Black Panther Party in Atlanta, GA in 2008 and “The Black Panther Rank and File” at the Yerba Buena Center for the Arts, San Francisco in 2006. In 2007, artist Sam Durant curated a solo exhibition of Douglas’ work at the MOCA Pacific Design Center. Douglas’s work has also been presented at the 2008 Biennale of Sydney, Australia; the African American Art & Cultural Complex, San Francisco; Richmond Art Center, CA; and the Station Museum of Contemporary Art, Houston.

View a larger image of the artwork.

Please take a few minutes to review the artwork above and complete a comment form below. You may also email your comments to sfacpublicartcomment@sfgov.org, or hand deliver/mail comments to 401 Van Ness Avenue, Room 325 by December 16, 2019, 5 p.m.