Art Beautifies Gateway to the Bayview

Islais by Cliff Garten Studio is an artwork that is inspired by the history and landscape of Bayview Gateway and Islais Creek Community Celebration – May 25, 11:30 a.m. -1:30 p.m. 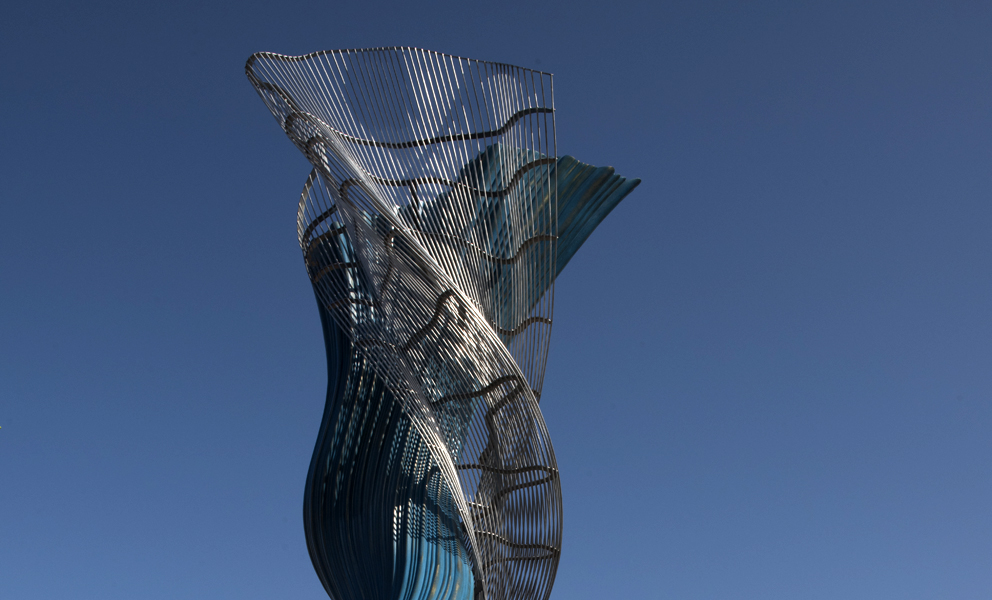 SAN FRANCISCO – The Port of San Francisco in partnership with the San Francisco Arts Commission announces a new art installation marking an official gateway to the Bayview neighborhood. Located at the intersection of Third Street, Arthur Avenue and Cargo Way, Islais, designed by acclaimed public artist Cliff Garten, was inspired by the landscape of Islais Creek and the Bay and the history of the Bayview community.

“The Port is proud to collaborate with the Bayview community and the San Francisco Arts Commission to enhance Islais Creek Gateway area with the installation of a magnificent art sculpture,” said President of the San Francisco Port Commission Kimberly Brandon.  “The sculpture is the newest addition to the Bayview Gateway open space, which was improved by the Port in 2015, and adds to the series of recent public realm and Blue Greenway improvements in the area including: Bayview Rise, Heron’s Head Park, Cargo Way bicycle facility and Heron’s Head Park improvements. The Gateway is a long envisioned improvement by and for the Bayview community, and can be enjoyed by all San Francisco residents and visitors alike.”

The Port of San Francisco is hosting a community celebration to mark the completion of the gateway project on Friday, May 25, 11:30 a.m. to 1:30 p.m.

According to the artist, “One of the major characteristics that unites all of the communities in Bayview and their histories is the landscape of Islais Creek and the Bay. The creek and its fluvial valleys were a rich food source for the Ohlone tribe and also the source of San Francisco drinking water until late in the nineteenth century. From Spanish explorers to the Gold Rush shantytowns to the migrations of African Americans, the Bayview neighborhood has seen large portions of American history played out on its shores, and the community continues to evolve. With Islais, I created an image that would represent the essence of the Bayview community and become an iconic celebratory point of entry to the neighborhood.”

The Bayview Gateway is marked by two distinct installations: a blue polychrome bronze sculpture with a stainless-steel wrap on the West side of Third Street and on the East side, a horizontal banner that lines the backdrop of the landscape.

The vibrant blue bronze and stainless-steel sculpture stands 20-feet tall and references the shape of the estuary with its different outlets before Islais Creek became a single channel. The stainless-steel wrap of the Islais sculpture was created by using the shape of the original coastline that explorers found as the profile for the rods at the bottom of the form, and the most recent shape of the mouth of the Creek as the profile of the rods at the top. Garten says, “The sculpture suggests that, like the Bayview community, the land is in a constant state of change, yet it is solid and enduring.” At night, the sculpture is illuminated by white LED lights, highlighting the contrast between the blue patina of the sculpture and the silver of the stainless-steel rods.

The banner installation on the eastside of Third Street features the remnant shape of Islais Creek and its watersheds snaking into the Bay. While the sculpture refers to the evolving coastline of the Bayview, the banner design references Islais Creek as it moves across the landscape. Together these two elements represent a physical timeline of the community and create a prominent and celebratory icon for Bayview.

“Cliff Garten has designed an elegant and thoughtful installation for the Bayview community,” said Director of Cultural Affairs Tom DeCaigny. “While futuristic in design, Islais honors the neighborhood’s pastoral past by reminding of the rich natural landscape.”