Brian Belott’s RHODASCOPE: Scribbles, Smears, and the Universal Language of Children According to Rhoda Kellogg 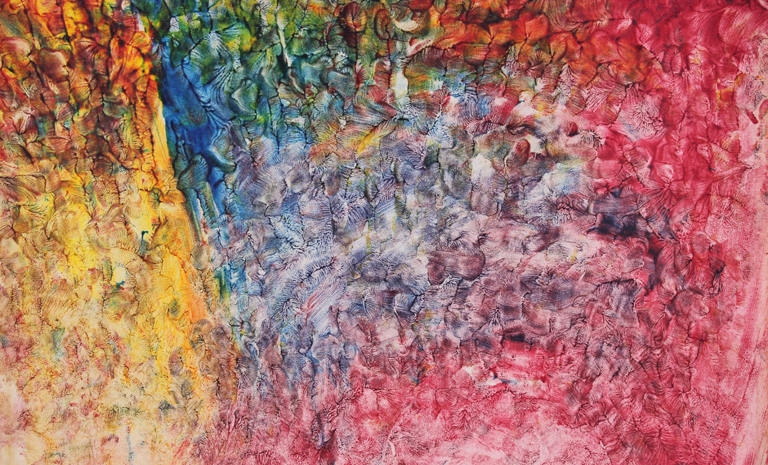 SAN FRANCISCO, April 29, 2019 – Brooklyn-based artist and child art enthusiast, Brian Belott, who will be featured in the Whitney Museum’s 2019 Biennial, came across Rhoda Kellogg’s name again and again in the course of his open-ended research. Kellogg (b. 1898, Bruce, WI, d. 1987, San Francisco, CA) was an early childhood scholar, theorist, educator, author, and activist who, for six decades, was in a near-continual state of processing child art, most significantly as the designer and director of the Phoebe A. Hearst Preschool, which still operates in San Francisco, from 1966 to 1986. Belott’s interest in Kellogg eventually led him to a sleeping archive in a Connecticut storage facility encompassing over two million drawings by children – the largest survey of scribbles and finger paintings ever conducted. He was knocked out.

According to Belott, “Typically, people are drawn to early pictorialism over scribbling and finger painting. Rhoda’s first focus was creating the environment for children to do what they do, and then decode it for adults. She gives them the language to appreciate these ‘unintelligible’ forms. Amassing such a huge amount of work served to underscore the value of the scribbles and fortify this bridge from the child world to adult thinking.”

“It’s incredibly exciting to bring this important collection to our residents and visitors, and celebrate the achievements of Rhoda Kellogg, a San Francisco legend in the field of early arts education,” says SFAC Galleries Director, Meg Shiffler. “In addition, we are also highlighting an important contemporary artist, Brian Belott, through his artwork and dedication to bringing greater exposure to Rhoda’s collection.”

A pioneer in the analysis of child art, Kellogg believed in the fundamental role visual language plays in the emergence of consciousness. Her studies culminated in the creation of classification systems for the early stages of artistic development and the authorship of numerous books on the subject. Her research demonstrated that children follow a predictable continuum of graphic development, from scribbles to finger paintings to certain basic forms, and that this development is universal across cultures. “Scribbles are the building blocks of children’s art,” Kellogg noted. “From the moment the child discovers what it looks like and feels like to put these lines down on paper, they have found something they will never lose, they have found art.”

The second aspect of the exhibition features a number of works on canvas by Belott that recreate enlarged versions of drawings and paintings originally made by children. Singular and uncanny, the “forgeries” series shows an adult artist striving for the impossibility of total freedom from self-consciousness. Like Kellogg, Belott processes overwhelming amounts of information through handling, copying, and organizing, simultaneously documenting and reappraising source material most often destined for the trash heap. This ongoing body of work expands upon his fervent fascination with artwork that has been labeled “amateur.”

The third and final aspect of the exhibition is Kellogg’s own work, produced when she was in her 70s and 80s, and only recently shown for the first time in New York. The exhibition includes two groups of her works on paper: cut-paper collages and mixed-media drawings.

RHODASCOPE is a play on words that conjures the rotoscope, a device from the early days of cinema used by animators to trace live action footage projected frame-by-frame onto paper. Belott was thrilled to discover that Kellogg copied children’s drawings herself, just as he’d done. We invite you to imagine the artworks in this unique installation as individual frames from a great and impossible film about creativity, perception, value, and collaboration.

Rhoda Kellogg (b. 1898, Bruce, WI, d. 1987, San Francisco, CA) was an early childhood scholar, theorist, educator, author and activist. She amassed an extensive and wide-ranging collection of child art—numbering over a million pieces—through her travels in 30 countries around the world and through her work with children at various preschools including the Phoebe A. Hearst Preschool (part of the Golden Gate Children’s Association) from 1966-1986. Kellogg earned an international reputation for her pioneering research in children’s art through lecturing, teaching, and publications, notably in her books What Children Scribble and Why (1955), The Psychology of Children’s Art (1967), Analyzing Children’s Art (1969) and Children’s Drawings, Children’s Minds (1979). Over the course of her career, she developed a classification system that describes the development of graphic expression in young children. Her research demonstrated that children follow a predictable continuum of graphic development, from scribbles through certain basic forms, and that this development is universal, across cultures. She created new metrics by which to view and interpret child art and advocated for a “whole child” approach to learning long before that was the widely held practice it is today.

Brian Belott (b.1973, East Orange, NJ) is an artist, curator, performer, and publisher based in Brooklyn, NY. He is the lead archivist of the Rhoda Kellogg International Child Art Collection. A lifelong collector of child art, he has studied the work of Rhoda Kellogg for over ten years. He sees the early developmental stages as the most unique aspect of the collection, as they are the richest in scribbling and finger painting. Brian Belott’s first book, Wipe That Clock Off Your Face (2007, PictureBox) includes a selection of his practices, including comic drawings, painting, collage, collage books, and a DVD with found sound and photography. Belott is represented by Gavin Brown’s Enterprise in New York, and his work has been exhibited at Canada Gallery, the Zürcher Studio, Galerie Zürcher in Paris, the Museum of Modern Art in New York, and he is a featured artist in the 2019 Whitney Biennial.