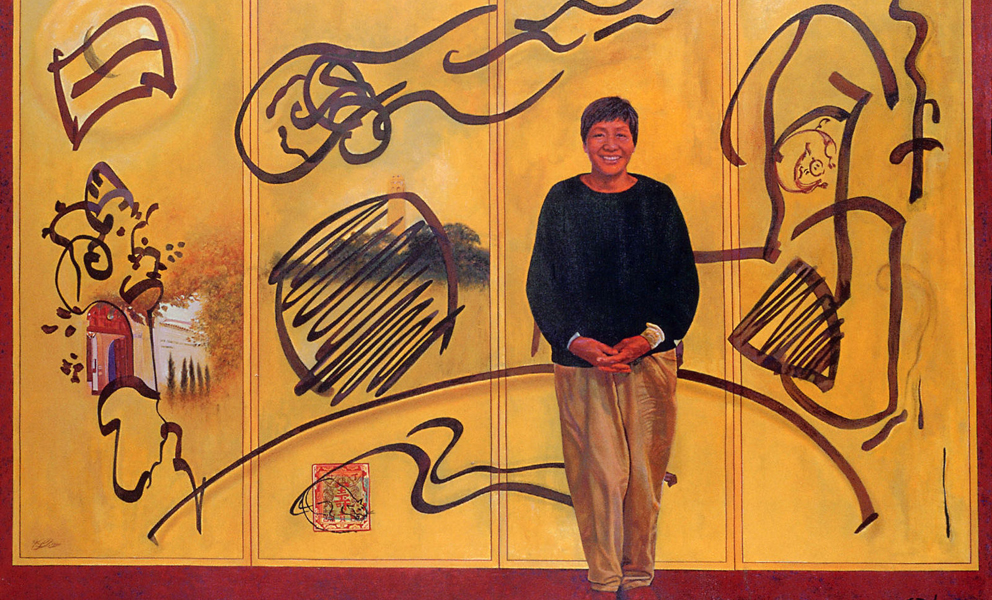 Detail of a painting by Lenore Chinn, a former Neighborhood Arts Program artist.

Culture Catalyst - An exhibition celebrating the art and legacy of the Neighborhood Arts Program
Curated by Kevin B. Chen and Jaime Cortez
On view April 27 – June 9, 2018
Opening Reception – April 27, 6-8 p.m

SAN FRANCISCO, March 22, 2018 – In 1967, artists, arts workers and activists banded together and launched a grassroots campaign to demand that the City support, not only major arts institutions such as the symphony, ballet and opera, but also the presentation of arts in San Francisco’s diverse neighborhoods. Culture Catalyst at the San Francisco Arts Commission Main Gallery (SFAC Main Gallery) celebrates the groundbreaking program born out of this movement with work by over 20 contemporary artists who represent the Program’s ongoing legacy. The exhibition will also feature a series of specially commissioned drawings by California artist Veronica De Jesus that illustrate pivotal Program milestones.

“San Franciscans, and frankly the residents of most major cities throughout the United States, owe so much to the Neighborhood Arts Program, which elevated neighborhood arts and increased access to cultural experiences for all,” says Director of Cultural Affairs Tom DeCaigny. “The philosophy of supporting arts across the city in culturally, racially, and economically diverse settings, championed by the Program, still informs the work of the San Francisco Arts Commission. What better way to celebrate the 50th anniversary than by engaging local artists to help illustrate its profound impact.”

Initially funded by the City, the Zellerbach Family Fund, and the Rosenberg Foundation, the Neighborhood Arts Program (NAP) provided a wide range of free or very affordable support services to artists and community groups. The Program was vibrant and became even more so when it began hiring artists to work in neighborhoods with dollars from the Comprehensive Employment and Training Act (CETA), a federal program designed to train workers and provide them with public service jobs. At its peak in the mid-70s, the program employed over 120 artists creating and presenting work in neighborhoods citywide, and gave tens of thousands of San Franciscans access to arts classes and presentations of art, performances, screenings, and literary events in their neighborhoods.

“Visitors to the exhibition will experience the ongoing impact of the NAP as represented by dynamic paintings, drawings, prints, photography, and videos created by three generations of artists affiliated with the city’s six cultural centers and the Native American Arts and Cultural Traditions grant program,” say co-curators Kevin B. Chen and Jaime Cortez.  “The exhibition also celebrates the history of the NAP with a display of hundreds of vibrant posters and flyers for neighborhood exhibitions, performances, screenings, literary events, and art classes supported by the NAP throughout the city.  Large as it is, the vast display of posters and flyers gives but a small taste of the extraordinary artistic vibrancy the program unleashed across San Francisco.”

“The curators of Culture Catalyst had their work cut out for them in trying to capture the breadth and depth of the impact of the Neighborhood Arts Program,” states SFAC Galleries Director Meg Shiffler. “The exhibition tells this story through the eyes of visual artists whose practices were positively supported by the program in its heyday, and young contemporary artists who represent the spirit and legacy of the program today.”

By the late 70s, the political and economic climate had changed, and budget cuts diminished the program. Though NAP no longer exists, its impact and legacy still resonate. For example, San Francisco’s six cultural centers were born out of tireless advocacy from the NAP and neighborhood activists.  The contributions of the cultural centers (African American Art & Culture Complex, Asian Pacific Islander Cultural Center, Bayview Opera House, Mission Cultural Center for Latino Arts, Queer Cultural Center, and SOMArts) are represented by the drawings, prints, paintings, and objects made by three generations of artists closely associated with these centers who have been creating vibrant, multidisciplinary art since the 60s.

According to exhibition artist Lenore Chinn, “As a San Francisco native and artist, I gained entry into the local arts scene through the Neighborhood Arts Program. Later, I exhibited at the City’s neighborhood cultural centers. There I connected with a community of artists, where resources were shared and creative ideas could be incubated. These spaces continue to provide culturally enriching programs to a thriving and vibrant arts community, engaging audiences throughout the Bay Area."