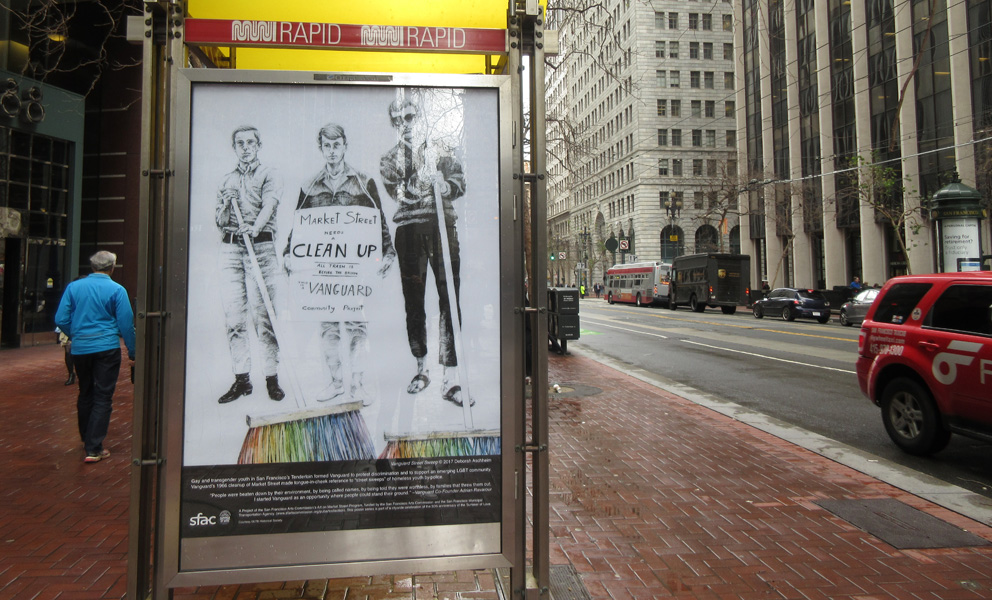 On view through May 12

SAN FRANCISCO – In conjunction with the regional 50th anniversary celebration of the Summer of Love, the San Francisco Arts Commission engaged three artists to reexamine this historic event through a contemporary lens for its popular Art on Market Street Poster Series. The first in the series, The Zeitgeist by Deborah Aschheim, features highly detailed pen and ink drawings of the people and events that defined 1967.

“Deborah Aschheim’s beautifully rendered posters capture the spirit of the ideas and radical expression that made the San Francisco Bay Area the epicenter of the counterculture movement,” says Director of Cultural Affairs Tom DeCaigny, “Much like today, 1967 was a time of intense disunity and anxiety in our country. The 50th anniversary of the Summer of Love is an opportunity to reconnect with its important legacy of political activism, inclusiveness and above all love. Aschheim’s posters reaffirm our history and remind us of the values we hold dear as a City.”

According to the artist, “My project explores the intersection of political and social utopian ideas that drew people to San Francisco, from the Free Speech movement at Berkeley to the art, music, and lifestyle scene. These struggles and celebrations of conflict and liberation are linked by a foundational critique of capitalism and social conformity, and the questioning of America’s obsession with success and materialism. I want to place the Summer of Love in a larger context of radical activism, spiritual and social experiments.”

To prepare for the series, Aschheim rigorously researched the archives at UC Santa Cruz and UC Berkeley. She unearthed the stories of people who participated in the emergent Black Panther Party; the Diggers, an anarchist art troupe that was a fixture of the Haight-Ashbury; the Vanguard, an early LGBT rights group based in the Tenderloin and a number of other significant political actions that took place 1967. Aschheim drew from collections including Pirkle Jones/Ruth-Marion Baruch, Michelle Vignes, Harry Redl photographs from Kenneth Patchen’s papers, Santa Cruz photographer Eric Thiermann and the GLBT Historical Society to find images to use as sources and inspiration for her six original drawings. The resulting artworks are meticulously rendered with judiciously placed touches of color that bring the Summer of Love back to life for current generations of San Franciscans.

Pedestrians along the City’s busiest thoroughfare will see scenes from the April 15, 1967 Spring Mobilization against the War in Vietnam and the Human Be-in alongside intimate portraits of individuals like Lawrence Ferlinghetti. Each image is accompanied by a caption that amplifies the drawing’s meaning. For example, a drawing based on Ruth-Marion Baruch and Pirkle Jones’ photographs of the Black Panthers is contextualized by a quote from Kathleen Cleaver that reconciles the group’s “militant” image with their intentions to uplift their community.

“The 60s’ struggles for racial, gender, economic equality, freedom and peace promised a better future, but in 2017 we have never been more aware of how fragile these social gains can be and how deeply we still struggle with division, inequality, injustice. I hope that entrepreneurs and billionaires have not replaced revolutionaries and poets as our heroes,” laments Aschheim. “I want to re-animate an authentic vision of 1967 that still has the power to inspire us to disrupt society in creative ways.”

The Zeitgeist is viewable in the Muni bus kiosks along Market Street between the Embarcadero and Eighth Street through May 12. Subsequent series will feature new work by Sarah Hotchkiss who will examine the “diverse Bay Area political, cultural and social scenes of 1967” through local mainstream and underground media and by Kate Haug, who has designed Summer of Love trading cards featuring an array of iconic personalities.

For more information about the Summer of Love anniversary celebration visit Summerof.Love or SummerofLove2017.com.

ABOUT THE ARTIST
Deborah Aschheim makes installations, sculptures and drawings about memory and place. She has had solo and group exhibitions across the United States and internationally, including the Barrick Museum at the University of Nevada, Las Vegas; Oficina de Proyectos Culturales in Puerto Vallarta, Mexico; Suyama Space in Seattle, WA; San Diego State University Art Gallery, CA; the Pasadena, CA, Armory and the Pasadena Museum of California Art; the Mattress Factory Museum in Pittsburgh, PA; Otis College of Art and Design in Los Angeles, CA; Laguna Art Museum in Laguna Beach, CA.

She has created permanent public artworks for the Sandler Neurosciences Center at the University of California, San Francisco; for Amazon.com in Seattle, WA; for the City of Sacramento and for the Los Angeles Police Department.  She has been artist-in-residence at The MacDowell Colony in Peterborough, NH; McColl Center for Art and Innovation in Charlotte, NC; Headlands Center for the Arts in Sausalito, CA; Bemis Center for Contemporary Arts in Omaha, NE and the Roswell Artist in Residence Program in Roswell, NM. She was the inaugural Hellman Visiting Artist at the Memory and Aging Center in the Neurology Department at UCSF and has received artists’ fellowships from the California Community Foundation, the Center for Cultural Innovation, the City of Los Angeles and the New Jersey State Council on the Arts.