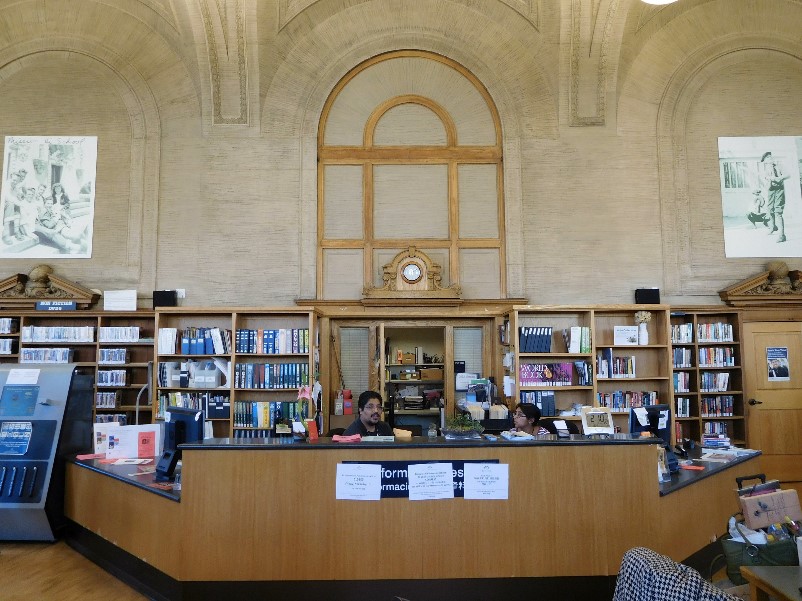 The San Francisco Arts Commission is conducting a review process to choose an artwork for the renovated Mission Branch Library, located at 300 Bartlett St. The art enrichment opportunity will be located at the infilled window niche on the second floor in front of the main stairway. The renovated Mission Branch Library is designed to return the main entrance to 24th Street, return the main stairway to its original location, create a community program room, dedicated teen area, additional restrooms, and a large children’s library. The goal of the artwork is to be a community asset and reflect the identity of the Mission neighborhood, be appropriate to the Mission Branch Library as a project site and library environment, and serve as a way-finder, helping users locate the main staircase of the Library. Three artists were chosen as finalists by a Selection Panel to create site-specific proposals, they are: Juana Alicia Araiza, Javier Rocabado, and Josué Rojas. 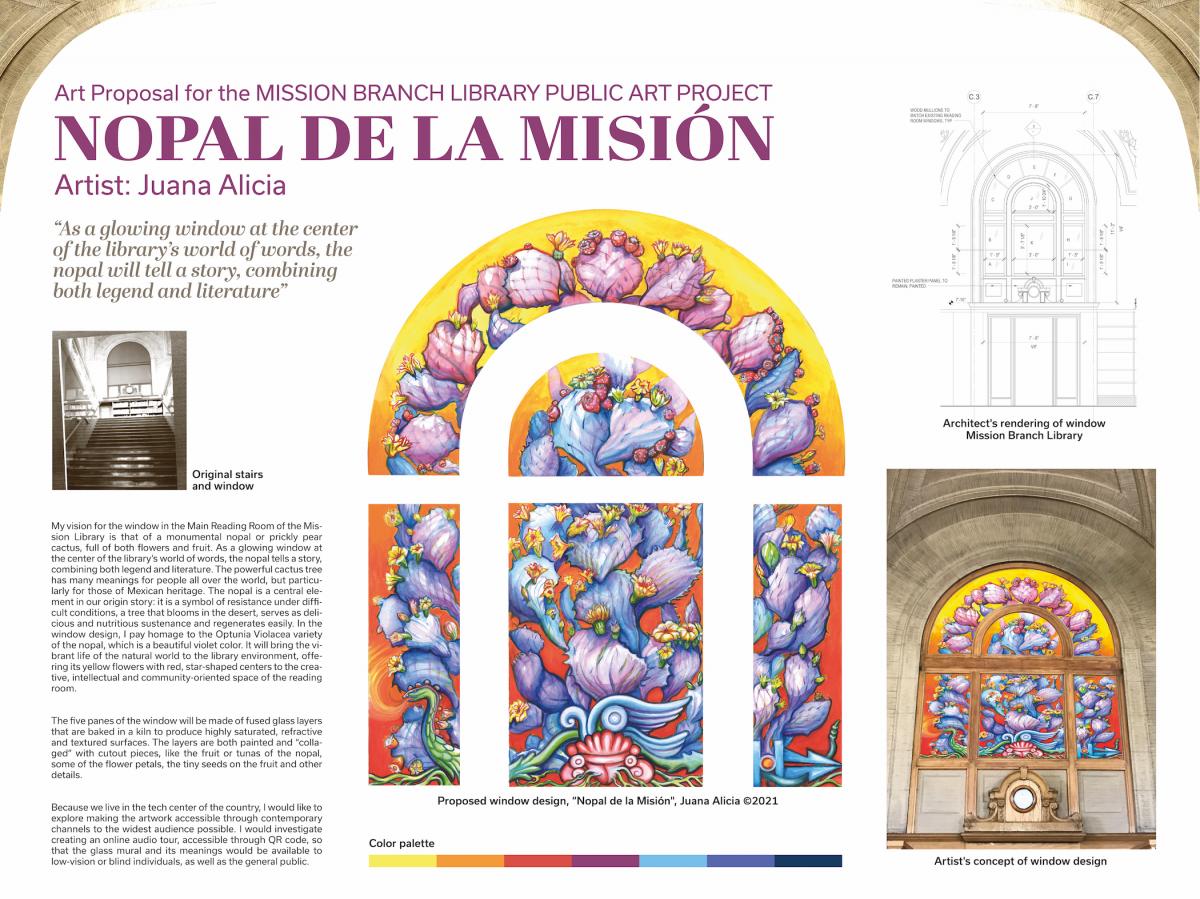 My vision for the window in the Main Reading Room of the Mission Library is that of a monumental nopal or prickly pear cactus, full of both flowers and fruit. As a glowing window at the center of the library’s world of words, the nopal tells a story, combining both legend and literature. The powerful cactus tree has many meanings for people all over the world, but particularly for those of Mexican heritage. The nopal is a central element in our origin story. According to legend, the gods had predicted the founding of Tenochtitlán (Mexico City) at the site where the itinerant Nahua (Aztec) peoples spotted an eagle holding a serpent in its beak atop a nopal cactus. At the base of the design are the symbols for the goddess Mallinalxochitl (from Nahuatl malinalli "grass" and xochitl "flower"), who was responsible for the apparition of the founding moment. The snake in the image is a feathered serpent, or Quetzalcoatl, the deity representing wisdom and knowledge for the Mexican people.

But the significance of the plant goes beyond this story; it is a symbol of resistance under difficult conditions, a tree that blooms in the desert, serves as delicious and nutritious sustenance and regenerates easily. The style of the watercolor and the inclusion of the Nahua symbols refer to the style of the traditional books of the Aztec and Mayan people, the style of the codex.

In the mural design, I pay homage to the Optunia Violacea variety of the nopal, which is a beautiful violet color. It will bring the vibrant life of the natural world to the library environment, offering its yellow flowers with red, star-shaped centers to the creative, intellectual and community-oriented space of the reading room. The organic forms will complement the Beaux Arts architecture and provide a visual respite from the hard-edged urban environment.

View a larger image of the proposal 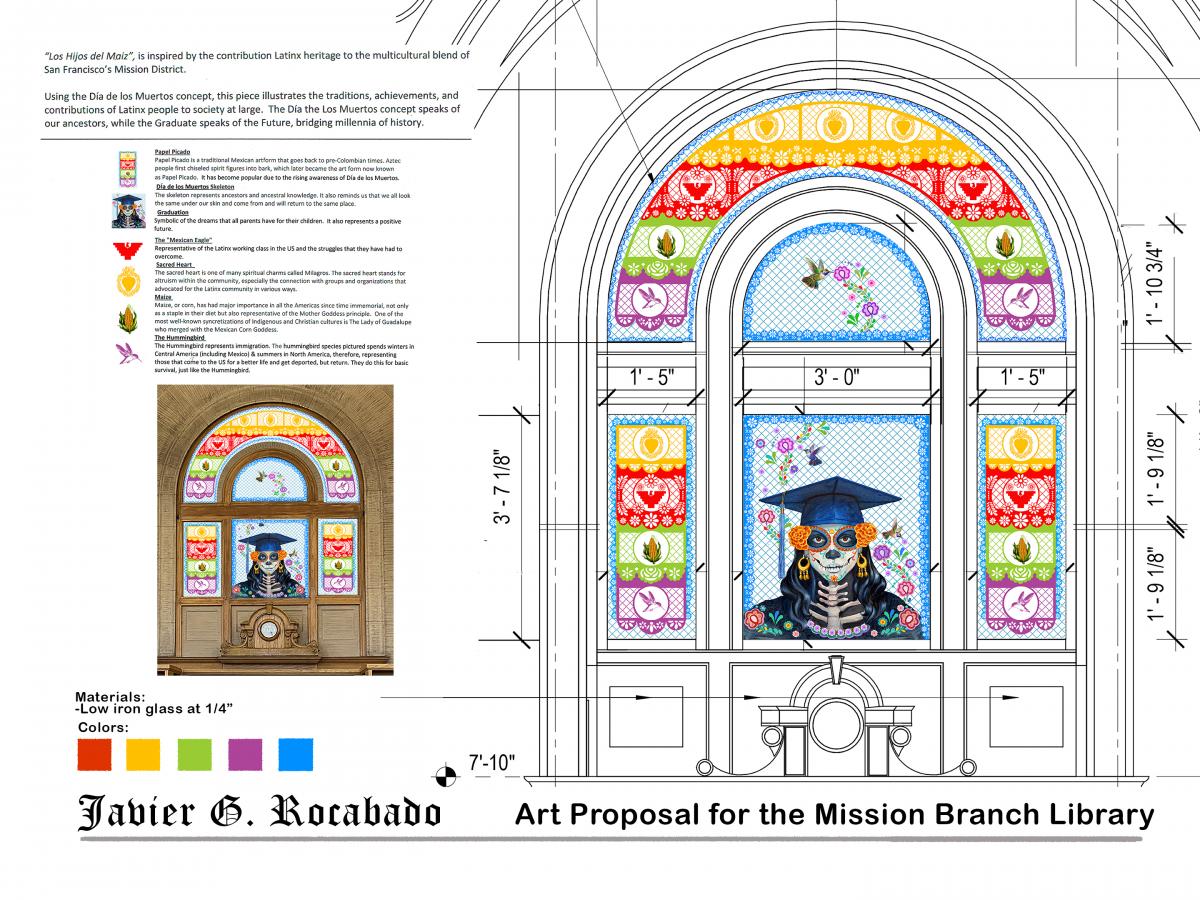 The Mission District of San Francisco was my home for 25 years. During that time, I was part of the Latinx cultural art scene. One of my contributions on a yearly basis, was to create altares for the Day of the Dead celebration at the Mission Cultural Center, SOMArts and other exhibitions.

Los Hijos del Maiz is dedicated to René Yañez, the late curator of SOMArts.  Using the Día de los Muertos concept, this piece illustrates the traditions, achievements, and contributions of Latinx people to the Mission District and society at large.  The Día de los Muertos concept speaks of our ancestors, while the Graduate speaks of the Future, bridging millennia of history.

In 1972, René Yañez, founder of the Galería de la Raza in San Francisco’s Mission District neighborhood, initiated the first recorded Día de los Muertos celebrations in California. He organized the first public exhibition of "altares".  Rene was instrumental in establishing Día de los Muertos as an important cultural celebration in San Francisco.  These celebrations were marked by increasingly large exhibitions, ceremonies, processions, and school-based activities. This transformed the tradition into the urban artistic phenomenon and community-building tradition that it is today.

The main symbols within this piece are:

Papel Picado
Papel Picado is a traditional Mexican artform that goes back to pre-Colombian times. Aztec people first chiseled spirit figures into bark, which later became the art form now known as Papel Picado.  It has become popular due to the rising awareness of Día de los Muertos.

Día de los Muertos Skeleton
The skeleton represents ancestors and ancestral knowledge. It also reminds us that we all look the same under our skin and come from and will return to the same place.

Cempasuchil (Marigold)
Flowers are a symbol of the impermanence and fragility of life and have many uses in Day of the Dead celebrations.

The "Mexican Eagle"
Representative of the Latinx working class in the US and the struggles that they have had to overcome.

Sacred Heart
The sacred heart is one of many spiritual charms called Milagros. The sacred heart stands for altruism within the community, especially the connection with groups and organizations that advocated for the Latinx community in various ways.

Maize
Maize, or corn, has had major importance in all the Americas since time immemorial, not only as a staple in their diet but also representative of the Mother Goddess principle.  One of the most well-known syncretizations of Indigenous and Christian cultures is The Lady of Guadalupe who merged with the Mexican Corn Goddess.

The Hummingbird
The Hummingbird represents immigration. The hummingbird species pictured spend winters in Central America (including Mexico) & summers in North America, therefore, representing those that come to the US for a better life and get deported, but return. They do this for basic survival, just like the Hummingbird.

View a larger image of the proposal

Azulejo y Cerca: Sacred Universe: From the Mission to the Cosmos 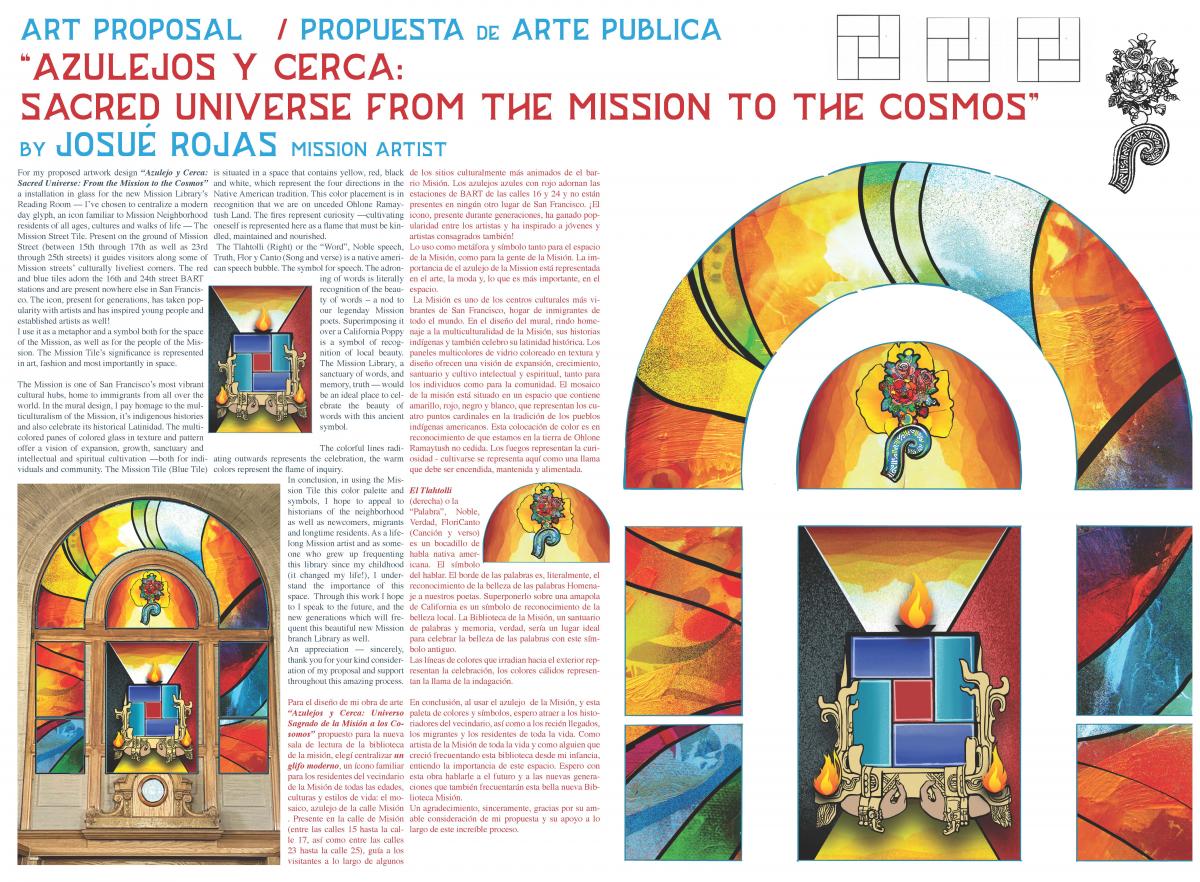 For my proposed artwork design “Azulejo y Cerca: Sacred Universe: From the Mission to the Cosmos” a installation in glass for the new Mission Library’s Reading Room –– I’ve chosen to centralize a modern day glyph, an icon familiar to Mission Neighborhood residents of all ages, cultures and walks of life –– The Mission Street Tile. Present on the ground of Mission Street (between 15th through 17th as well as 23rd through 25th streets) it guides visitors along some of Mission streets’ culturally liveliest corners. The red and blue tiles adorn the 16th and 24th street BART stations and are present nowhere else in San Francisco. The icon, present for generations, has taken popularity with artists and has inspired young people and established artists as well! It adorns murals, tshirts, posters, artworks and even tattoos!

I use it as a metaphor and a symbol both for the space of the Mission, as well as for the people of the Mission. The Mission Tile’s significance is represented in art, fashion and most importantly it has been adopted by its people in the space.

The Mission is one of San Francisco’s most vibrant cultural hubs, home to immigrants from all over the world. In the mural design, I pay homage to the multiculturalism of the Mission, it’s indigenous histories and also celebrate its historical Latinidad. The multicolored panes of colored glass in texture and pattern offer a vision of expansion, growth, sanctuary and intellectual and spiritual cultivation ––both for individuals and community. The Mission Tile (Blue Tile) is situated in a space that contains yellow, red, black and white, which represent the four directions in the Native American tradition. This color placement is in recognition that we are on unceded Ohlone Ramaytush Land. The fires represent curiosity ––cultivating oneself is represented here as a flame that must be kindled, maintained and nourished.

The Tlahtolli or the “Word”, Noble speech, Truth, Flor y Canto (Song and verse) is a native american speech bubble. The symbol for speech. The adroning of words is literally recognition of the beauty of words – a nod to our legendary Mission poets. Superimposing it over a California Poppy is a symbol of recognition of local beauty. The Mission Library, a sanctuary of words, and memory, truth ––would be an ideal place to celebrate the beauty of words with this ancient symbol.

The colorful lines radiating outwards represents the celebration, the warm colors represent the flame of inquiry.

In conclusion, in using the Mission Tile this color palette and symbols, I hope to appeal to historians of the neighborhood as well as newcomers, migrants and longtime residents. As a lifelong Mission artist and as someone who grew up frequenting this library since my childhood (it changed my life!), I understand the importance of this space. Through this work I hope to speak to the future, and the new generations which will frequent this beautiful new Mission branch Library as well.

View larger image of the proposal

Please take a few minutes to review these artwork proposals to provide public comment. Public comments will be considered as part of the Final Review Panel meeting where the Panel members will recommend one proposal for implementation. The proposals are available online at www.sfartscommission.org/calendar, in the Public Art Proposal Display section or comments may be emailed to sfacpublicartcomment@sfgov.org by Thursday, August 5th, 2021 at 5:00 p.m.

The Final Review Panel meeting will take place virtually on Monday, August 9, 2021, 1:00 p.m. – 5:00 p.m. and will be open to the public to attend. An agenda for the meeting will be posted 72 hours in advance on SFAC’s website under the Public Meeting section: www.sfartscommission.org along with instructions on how to join the meeting virtually. Please note that public comments do not constitute a vote.