Beyond Peace-Loving Hippies with Flowers in their Hair 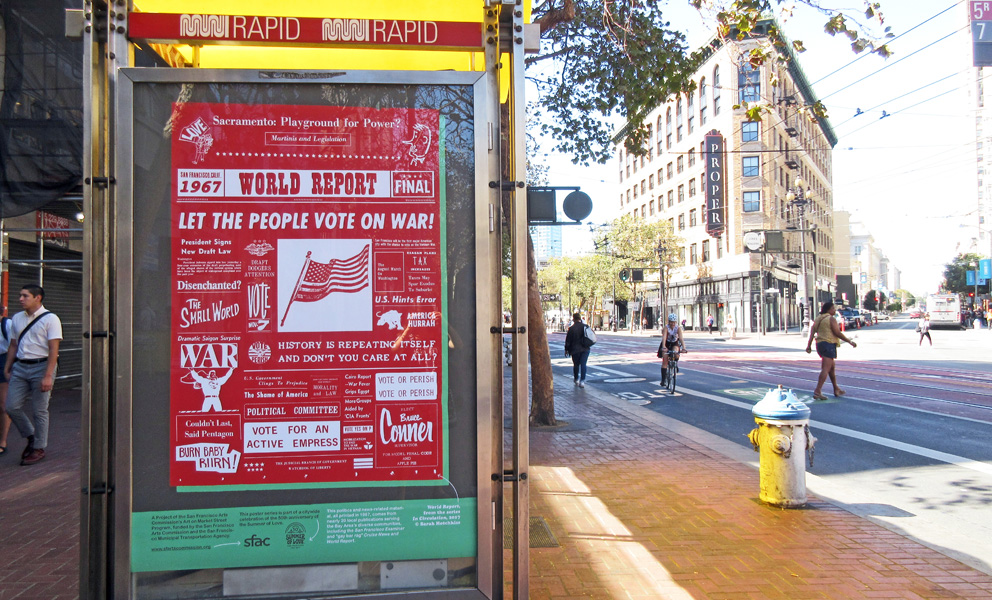 On view on Market Street between the Embarcadero and 8th Street through January 12, 2018

SAN FRANCISCO – For the San Francisco Arts Commission’s final Summer of Love-themed poster series, Sarah Hotchkiss takes viewers beyond the ubiquitous images of long-haired hippies, dancing in Golden Gate Park with flowers in their hair holding peace signs. Her series, In Circulation, highlights the many diverse Bay Area political, cultural and social scenes of 1967 as seen through a host of both mainstream and underground publications. On view through January 12, 2018 in the bus kiosks along Market (between the Embarcadero and 8th Street), the posters compose a more inclusive and uncensored view of the other counterculture groups making waves during the Summer of Love.

“We are thrilled to conclude our popular Summer of Love-themed poster series with a body of work that expands perceptions of this iconic cultural moment,” says Director of the Public Art Program and Civic Art Collection Susan Pontious. “Sarah Hotchkiss’s posters tap into underrepresented narratives and reminds people that 1967 was an intense time in our country when many different groups were finding their voices and struggling to be heard and accepted. Artists are wonderful at finding creative ways to question the status quo and to memorialize unsung heroes whose efforts paved the way for the freedoms we enjoy today.”

In her quest to “seek out the ‘true’ images of the Summer of Love,” Hotchkiss steeped herself in local printed media. She poured over not just the Haight Ashbury Free Press, but also the San Francisco Chronicle, the Berkeley Barb, the Black Panther’s Black Community News Service, and LGBTQ publications, including the Society for Individual Rights’ magazine Vector and the Daughters of Bilitis' The Ladder.

According to Hotchkiss, “These publications chronicle the ideas, emotions and advertising needs of the city’s new population: runaway youth, utopian dreamers, rock ‘n’ roll fans and fiery political activists. But they also chronicle the city’s more ideologically mainstream population (and their attempts to understand the hippies in their midst).”

Repurposing and combining headlines, illustrations and graphic elements from these diverse outlets, she reconstructs a new “multifaceted and contradictory” newspaper divided into six “sections” organized around specific themes: News, Ads, Arts, Food, Sports and Personals. There are six distinct posters in the entire In Circulation series that repeat six times along Market Street.

“Cumulatively, the posters show a glimpse into the material culture of 1967, as told by the journalists, agitators and advertisers of 1967,” says Hotchkiss. “Perhaps not surprisingly, many of their concerns (racial justice, freedom of speech, equal rights, fair housing) are as familiar to us today as the iconic images of long-haired hippies in Golden Gate Park.”

The artist describes some of the posters in her series as follows:

In the World Report poster, arguments for and against the war in Vietnam live in neighboring columns, alongside questions of American honor and American shame. The hippie mantra of “love, not war” is juxtaposed with the Black Panthers’ message of “burn baby burn!”

The Emporium poster includes ads for round beds, color televisions and washing machines, along with listings culled from the Berkeley Barb’s classifieds, where it seems almost everything was “FREE!”

And in the Artistic Paths that Crossed poster, the Bay Area’s booming art scene encompasses not just staid exhibitions of paintings, but mentions of comics, new artists’ cooperatives, an early ad for the Audium and an emerging field of “happenings.”

Monuments and Memorials in the Civic Art Collection