Moscone Center is San Francisco's premier meeting and exhibition facility, with over 2 million square feet of exhibit space, meeting rooms and pre-function lobbies. As the City’s convention landscape continues to grow, the Moscone Expansion Project meets the need for additional rentable square footage with the enlargement of contiguous exhibition space and flexible meeting and ballroom spaces. The project design creates an iconic sense of arrival that enhances Moscone’s civic presence on Howard Street with the creation of midblock passageways, an enclosed pedestrian bridge connecting Moscone North and South and a comprehensive public art program, commissioned by the San Francisco Arts Commission (SFAC).

Early on, the SFAC worked closely with the Moscone Expansion project team to identify opportunities for public art. With 2%-for-art funding generated by the capital project, the Arts Commission commissioned light artist Leo Villareal for the enclosed pedestrian bridge across Howard Street; Sarah Sze for the East Bridge, spanning Howard and Fourth streets; Christine Corday for a large outdoor sculpture on the north side of Howard Street; and Brendan Monroe for a large-scale mural within the Paseo, a pedestrian walkway behind the convention building connecting Third Street with Yerba Buena’s Children’s Garden.  All artists were selected through a competitive public process and approved by the San Francisco Arts Commission.

Leo Villareal, Point Cloud
Leo Villareal's work is focused on stripping systems down to their essence to better understand the underlying structures and rules that govern how they work. He is interested in lowest common denominators such as pixels or the zeros and ones in binary code. His work explores more than physical dimensions, time is combined for both spatial and temporal resolution. Villareal's forms move, change, interact and ultimately grow into complex organisms. His goal is to create a rich environment in which emergent behavior can occur without a preconceived outcome. The visual manifestation of the code in light is at the core of the artist's interest.

Villareal’s artwork for the Moscone Center consists of a light sculpture composed of over 50,000 full color LEDs arranged in a three dimensional array. Approximately 800 mirrored stainless steel rods, hanging from the ceiling, support the led matrix and produce an optical and ephemeral effect, almost disappearing as they mimic their surroundings.

The artwork was site specifically made, sequenced with Villareal’s custom software, that produces constantly evolving patterns inspired by the kinetic activity around the Moscone center. Bursting with energy, Point Cloud compliments the architecture and site as it unites light, art and technology in a unique and universally accessible way, creating a strong identity for the Moscone Expansion Project. 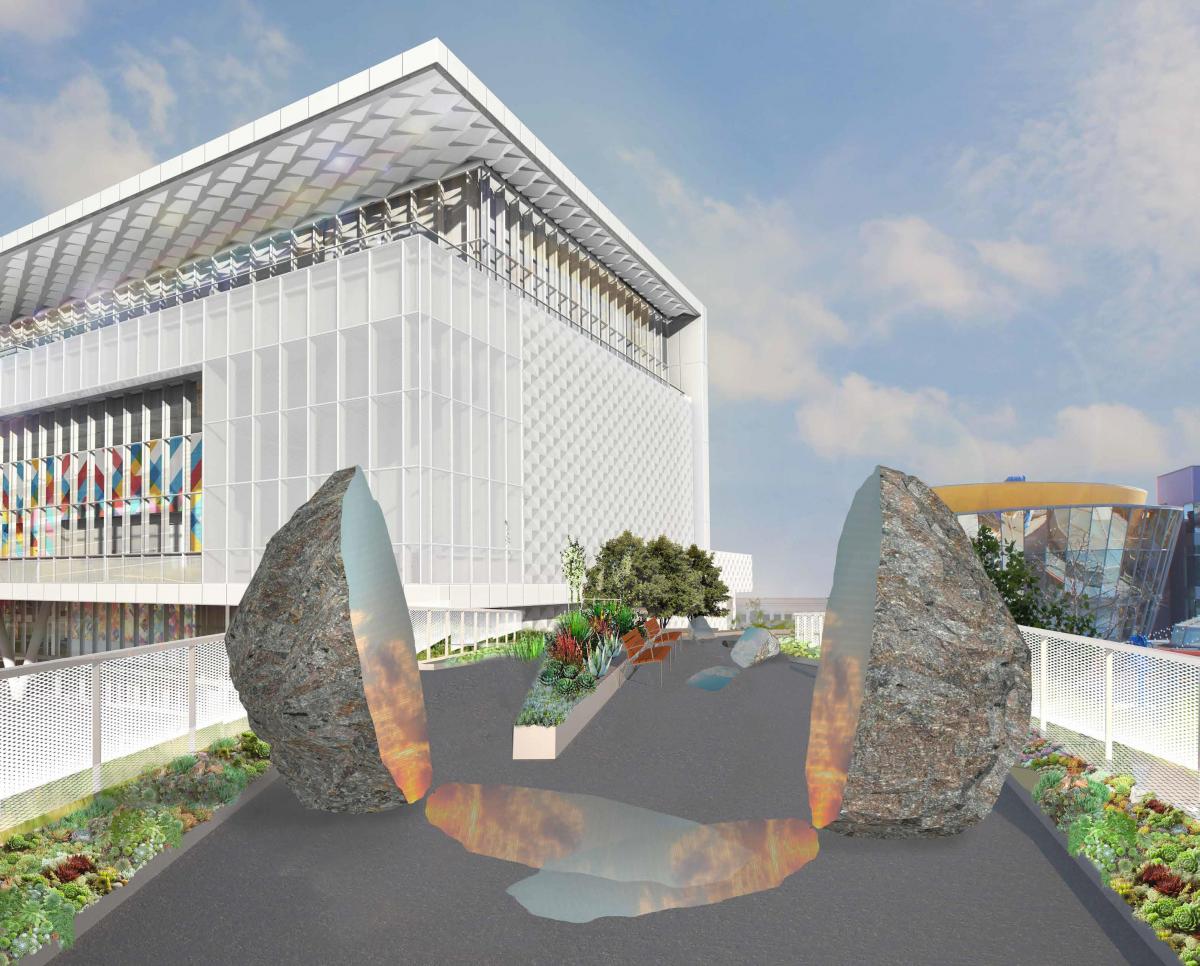 Sarah Sze, Double Horizon
Sarah Sze's work navigates and models the proliferation of information and objects in contemporary life. Incorporating elements of painting, architecture, and installation within her sculpture, Sze investigates the value we place on objects and explores how objects ascribe meaning to the places and times we inhabit. She has exhibited at the Whitney, the Museum of Fine Arts in Boston, the Museum of Contemporary Art, Chicago, Foundation Cartier in Paris, and the Institute of Contemporary Arts in London. Her work is also included in the permanent collections of the Guggenheim, the Museum of Modern Art, New York, the Museum of Contemporary Art in Tokyo, the High Museum, the Carnegie Museum of Art, and SFMOMA. She has also completed public commissions for the High Line Park and MIT, and is currently working on a permanently sited artwork to be located in San Francisco’s Chinatown. Sara works in New York City.

Sze’s installation is comprised of 2 large boulders split in half and flanking the path, between which the viewer will walk. Once on the bridge, viewers will discover that the flat inner surface of the split boulders altered using embedded epoxy tiles to create pixelated color images of the sky at different times of day. The same images will be mirrored in the pavers of the walkway, as if the rock, functioning as a printmaking stamp, has printed on the path and fixed the image of the sky in place through force of gravity and pressure.

By recording images in pixels and then fixing them in stone and pigment, Sze explores the fragility of time passing and our desire for weight and permanence in the face of both overwhelming natural forces and the ubiquitous images that surround us daily. 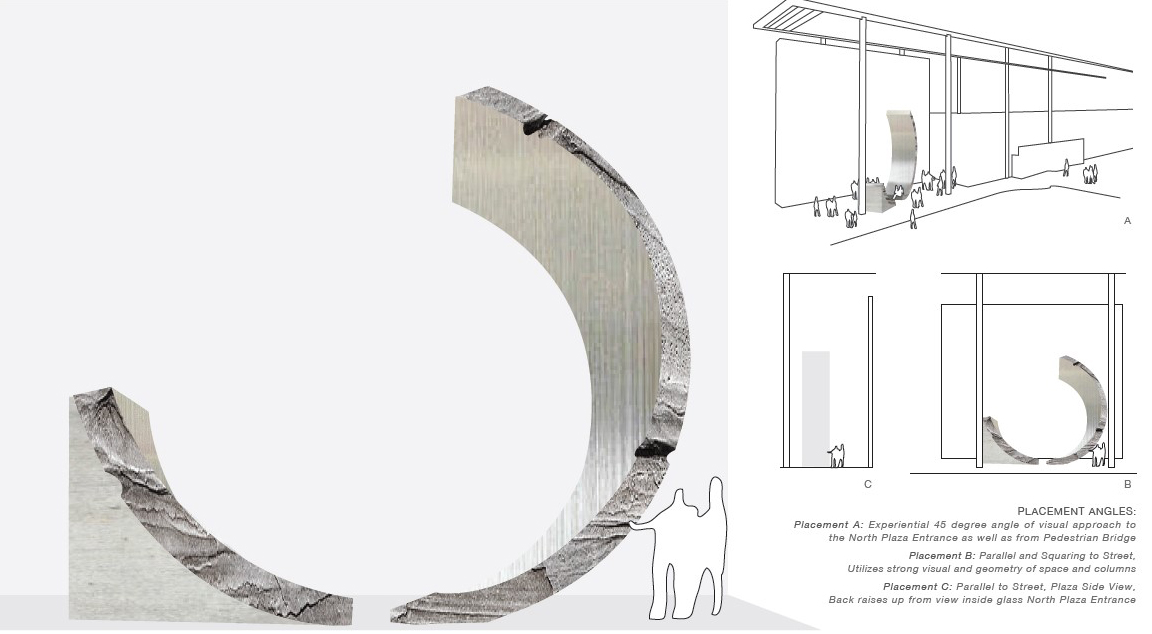 GENESES I is the first and unique work from a monumental series inspired by the concept of beginning. Its name is the phonetic fusion of the word in different languages. Its arcing segments are melted and hewn stainless steel supported by a concrete form. The work exhibits a cool planar edge and surface juxtaposed by the sensory examination of the grand-scale heat within its soft and epic melting cut. A heat allowing a material moment cooled or suspended between solid and liquid state, as well as mimicking the temperatures at the surface of the sun, the core of our earth. The work encourages touch, which is intended to provide a moment of respite and an engaged perceptual encounter. 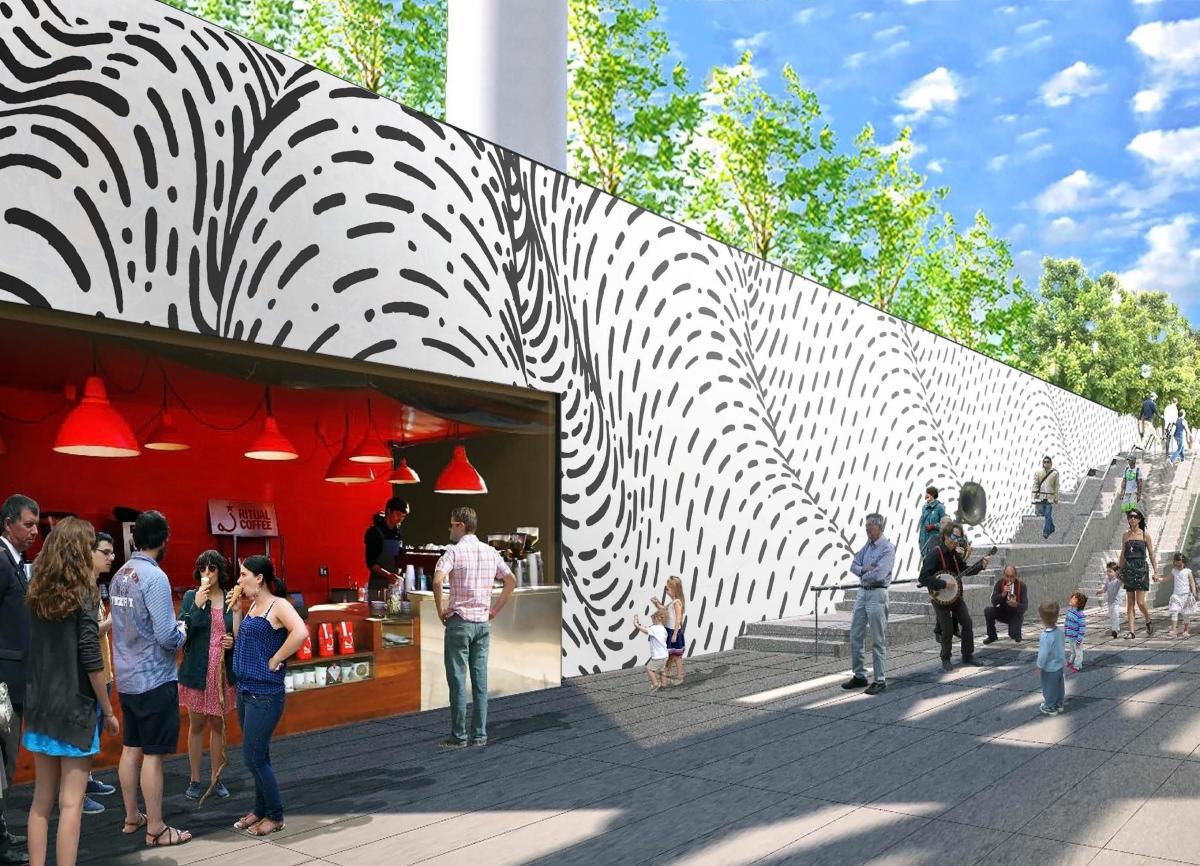 Roll is an artwork inspired by the movement of water and air in nature. The piece depicts an abstract mass filling and spilling over the wall and into the Moscone Paseo. To the West the dotted line work resembles a layer of fog coming in over the San Francisco coastal mountains. As it piles in and builds up to the East, the drawing intensifies, is rolled up and becomes heavy, just as if thick blanket is being pushed in toward the edge of the city.

The use of black, white and gray is a graphic representation and a man-made translation of soft, smooth ebb and flow of cloud banks. This takes cues from the grids inherent in the flat building wall and surrounding architecture and bends the picture plane in an optical play of surfaces and perspective. The mural evokes a human analytical look at the nature that has existed in the region with and without the City of San Francisco for millennia. The rolling volume of abstracted shape joins the viewer in the foreground and hints a subtle reminder that nature cannot be contained by the edges of the wall.

Reinstalled Works
As part of the expansion, the original 2D works and the bust of Mayor George Moscone, all of which were either commissioned or purchased for the convention center in the 1980s, were removed and restored.  The following works will once again be on public view with the opening of the Moscone expansion.