The installation marks several firsts: the artist’s first permanent public artwork on a landmark building in the USA and the San Francisco’s first major project funded by the City’s Public Art Trust 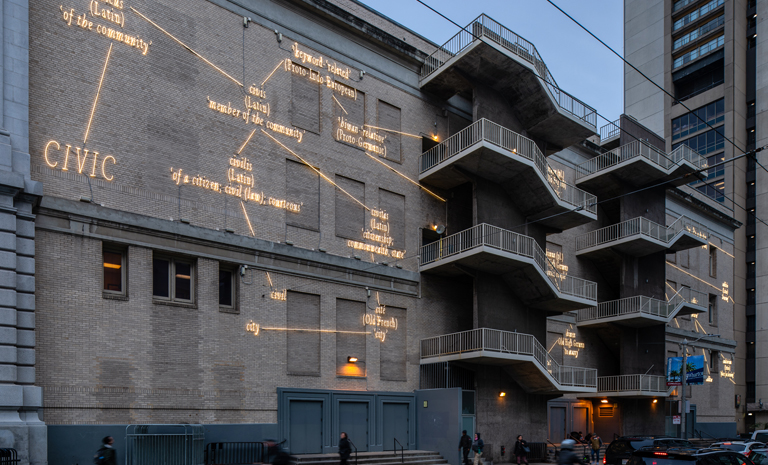 SAN FRANCISCO, March 6, 2019 – On March 13 at 6p.m., the San Francisco Arts Commission will host a lighting and dedication ceremony to commemorate a new sight-specific neon artwork on the western façade of the historic Bill Graham Civic Auditorium by internationally acclaimed conceptual artist Joseph Kosuth. W.F.T (San Francisco) presents the etymology, or “Word Family Tree”, of ‘Civic’ and ‘Auditorium’ in white neon. Through the use of language, Kosuth’s artwork reflects the historical significance of the Auditorium while also demonstrating how words reveal relationships to cultural and social realties. W.F.T (San Francisco) is Kosuth’s first permanent public artwork on an historic building in the United States. It is also the City’s first public art project funded by a private developer, Emerald Fund, through the Public Art Trust.

“Joseph Kosuth’s striking neon installation brings a dynamic energy to the building, transforming its western façade and enlivening its environs both day and night. We are grateful to Emerald Fund for being the first private developer to contribute to the Public Art Trust to beautify the public realm across from their two developments with art. This act of civic largess on the part of the developer reflects an exemplary public private partnership, resulting in a win/win for the city and the public. The work is not only visually compelling, it is educational and engaging.  I’d also like to thank Another Planet Entertainment for their cooperation and assistance,” says Director of Cultural Affairs Tom DeCaigny.

Established in 2012 with an amendment to Section 429 of the Planning Code, the Public Art Trust provides private developers with projects in various zoning districts multiple options regarding the use of their 1%-for-art requirement and allows developers to contribute all or a portion of the requirement to the Public Art Trust, which is administered by the Arts Commission. The Public Art Trust can be utilized to commission new public art for adjacent public space, restore extant artworks in the Civic Art Collection, assist art nonprofits located near the private development with capital projects or with funds for public programming, and to commission temporary public art programming in a variety of media for the developer’s Open Space or in the public realm. Emerald Fund was clear from the outset that they wanted a public art project that would enhance both the view their residents had from their two residential buildings, The Civic and 150 Van Ness, located across the street from the Bill Graham Civic Auditorium, as well as the surrounding neighborhood.

Marc Babsin, principal at Emerald Fund, shared, “We are very pleased with Joseph Kosuth’s artwork and with the option of contributing to the Public Art Trust. We have participated in the project from the onset, including serving on the panel that selected Kosuth through an international competitive process. The project has more than achieved our objective of beautifying the western façade of the Civic Auditorium for the enjoyment of our residents living across the street and the thousands of other community members passing through Civic Center on a daily basis.”

Kosuth typically works in an architectural context and his work can be found in significant historic buildings around the world including the Louvre in Paris. When conceiving of W.F.T (San Francisco), the artist considered the role the Auditorium has played in San Francisco history, from its inauguration in 1915 as part of the Panama–Pacific International Exposition to hosting psychedelic rock concerts in the 1960s to the present. The etymological origins of the words provide meaningful and coincidental associations with recent landmark public policy such as the legalization of gay marriage.

According to Kosuth, “The essence of this building and the historic plaza of which it is part is what I have tried to address in this public artwork. The basis of this project is language itself. It is a work that is both a reflection on its own construction as well as on the history and culture of its own location.”

The artist further describes his work as follows:

The structure of this installation has two parts: the etymology of the words ‘Civic’ and ‘Auditorium’ in white neon on the western façade. The word ‘Civic’ is intricately connected to the long history of civil rights activism that has taken place (and continues to take place) in the plaza–from Gay Rights to Black Lives Matter. The word ‘Auditorium’ on the other hand is more specific to the building itself, referring to the collective audience assembled by Bill Graham, who found a way, as a concert promoter to not only promote concerts but also community. It is only in the present when a word is used, as it is with a work of art being experienced, that all which comprises the present finds its location in the process of making meaning. Here, in this work, language becomes both an allegory and an actual result of all of which it would want to speak.

‘'As part of the role of curating the Bill Graham Civic Auditorium, Another Planet Entertainment is committed to presenting public art in different forms including, music, comedy, and visual design. Having this artwork on the side of the Bill Graham Civic Auditorium is a wonderful addition to the value we strive to bring to the City of San Francisco. We are pleased to continue to support the San Francisco Arts Commission and the Public Art Trust,” says CEO Gregg W. Perloff.

W.F.T (San Francisco) also complements the City’s design efforts to improve the Civic Center. The Civic Center initiative is a collaborative effort among the City of San Francisco and neighbors, community organizations, and cultural institutions to breathe new life into the City’s central civic spaces, changing how people engage with the place and with each other so that everyone can feel welcome and experience the best of San Francisco every day. For more information, please visit www.civiccentercommons.org.

Joseph Kosuth is represented by Sean Kelly Gallery in New York. For additional information on the artist please visit skny.com/artists/joseph-kosuth.

WHERE: Corner of Polk and Grove in front of the western façade of Bill Graham Auditorium