In 2010, with funding from the National Endowment for the Arts, the San Francisco Arts Commission started an Art in Storefronts program. 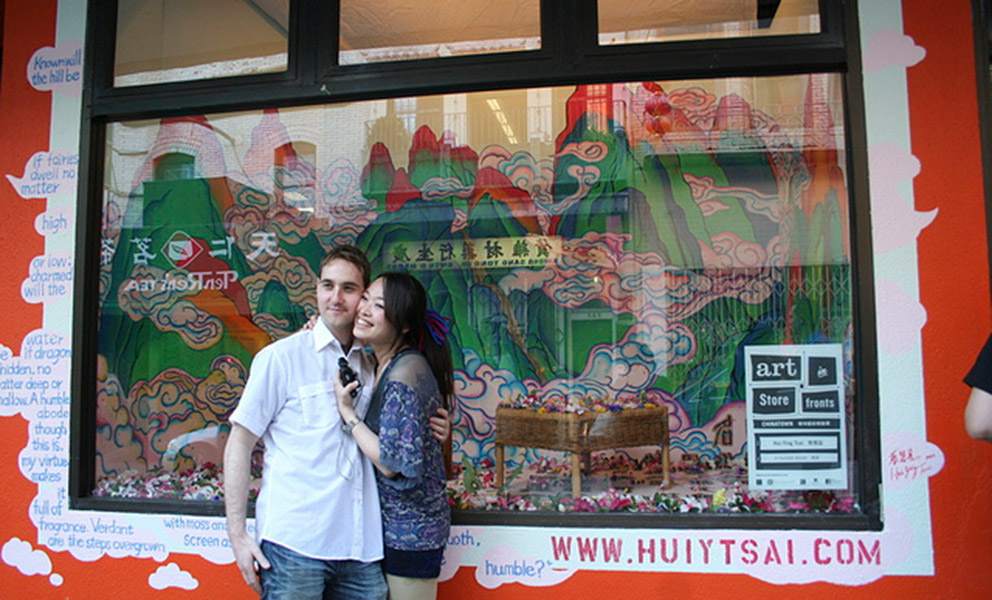 Designed to reinvigorate commercial corridors that had been hard hit by the economic downturn, the program ran successfully for nearly three years in several neighborhoods and was discontinued as the City's economy began to recover and storefront vacancies declined.

The program garnered national attention. While the Arts Commission no longer has a funding source to continue the program, the agency continues to receive inquiries from other cities and towns who wish to replicate the program. In response, we developed the Art in Storefront Toolkit, a compilation of helpful tips designed to help you start your own project.

IF YOU’RE A CITY AGENCY LOOKING TO START A PROGRAM:

Our goal was to have 26 storefront installations in vacant storefronts in four different neighborhoods. We worked with an economic development nonprofit organizations in each neighborhood which had pre-existing and deep connections with local merchants and property owners.

It was still difficult to get property owners to participate for several reasons.

Some property managers we approached thought it was a great idea but the owners, many of whom didn’t live in the neighborhood or even city, declined.

Some property owners thought it was a great idea until they had to sign the contract. A few property owners dropped out because we asked them to carry general liability insurance.

Even though we offered to clean up properties in return for their willingness to use the space, property owners didn’t jump at the opportunity.

We ended up expanding our initial concept and included under-utilized storefronts and businesses where the display windows were not utilized. We also included the creation of two exterior murals running along the north and south side of our busiest commercial corridor to add additional impact to the Art in Storefronts visual element. That proved to be a very successful decision.

In the end, one property owner provided five windows along a key commercial corridor

Are the property owners receiving any compensation for their loan of vacant space?

The property owners receive several benefits for providing use of their storefront but they were not paid to participate. We cleaned their space prior to installation and left the space cleaner than how we received it. Property owners noted a decrease in graffiti on the properties in which artists painted the exterior. And increased attention led to the rental of two properties.

How did you handle liability issues?

We required the property owner to carry general liability insurance. Our project managers, Triple Base, also named the City and the individual artists as additionally insured. The City used its own self insured policy to cover the value of the art if it was damaged or stolen from the storefront. The art insurance was valued at $500, the honorarium paid to participating artists, even though the work had greater monetary value. For example, the cost of replacing video equipment would exceed $500. The artists were advised to carry their own liability insurance and additional art insurance.

How much did the extra insurance cost?

The cost of naming additionally insured is minimal. Property owners and the project management team found that each insurance agent dealt with it differently. In some instances, it cost nothing extra. In other instances, it cost between $25 and $100.

How did you recruit artists?

Artists seemed hungry for a program like this and we received almost 200 applications for only 26 slots.

We issued a press release in conjunction with the Mayor’s office to announce the project and posted guidelines online to coincide with the media announcement. We then put the word out through our agency’s various e-Newsletters with a lot of traffic coming from our Gallery Program, Community Art and Education Program, and our Cultural Equity Grants Program. Triple Base also reached out to their extensive roster of artists.

Some feedback we received from the Mission District was that the artists who knew about the program application were those already involved with the Arts Commission. For our Chinatown program, we will send out a press release (to both English and Chinese language press) when the application is posted and we will hold an information session in Chinatown to answer questions about the program and talk about how to make a competitive proposal.

What kind of art was selected and is it viewed solely from the street?

Our priority was to select artists who lived or worked in the neighborhood and whose proposals were to create new work that celebrated the surrounding community. The strongest submissions were ones that employed inventive media or full scale installations and engaged people in an innovative and dynamic way.

In order to maximize the viewership and minimize liability issues, the installations were only to be seen from the street.

How often do you plan to change out exhibits/artwork? Do you have your schedule already set for the duration of the pilot program?

Since this was a pilot program, we did not plan to install future work in the space. Some property owners have made arrangements with the artists to keep the installations in the space longer than the extent of our program.

Some artists created programming that corresponded with their installation by holding an art opening at their nearby studio the same night as the launch.

What was your budget?

The entire project was created for $55,000 which covered project management, design and printing of marketing collateral, web design, artist stipends ($500 each), cleaning fees to prepare the windows for installation, and minimal installation and de-installation expenses. The project budget does not include City staff time.

Do you have samples of your contracts?

IF YOU’RE A PROPERTY OWNER:

How do I find an artist or artist collective?

Look around at local flyers and marketing materials to find artists who may live or work in your neighborhood. Check out art websites such as Open Studios/Art Span, SFAC or GFTA, Bayview Artists Shipyard, Fecal Face. Go to local galleries and artist work spaces and inquire.

What is the minimum the property owner should provide?

The property owner should provide a clean, accessible storefront with electricity and a secure door with a lock. The property owner should also provide general liability insurance and a set of keys to allow the artist to enter the space as necessary to install their art work. It is also helpful if the artists can store supplies in the storefront until the installation is complete.

Should the property owner select the specific art?

Many artists will want to install work they already have completed and want a place to display it. If an artist wants to create an original work or installation to be placed in the window, then the property owner should be provided with a sketch of the proposal.

Who pays for what?

How long does the artwork stay in the window?

The work should stay up as long as it is agreed upon and written into the contract.

What if the artist doesn’t want to remove the art?

The artwork should be removed on the date stated in the contract.

What if the property owner wants the art to stay in longer?

The property owner should discuss this as an option with the artist and if both parties agree to extend the exhibition time, change the dates in the contract.

What should be included in a letter of agreement between an artist and a property owner?

All agreements should be put into writing and signed by both parties. This includes installation and removal dates, when the property will be cleaned and ready for installation, and when the artist can pick up keys to the property; contact information for all parties and participants; insurance coverage, and fees.

IF YOU’RE AN ARTIST:

How do I find a property owner to work with?

Walk around your neighborhood and find the vacant store fronts that provide contact information for leasing or renting. In some instances it may be a property management company. Be sure you have the exact address.

You can also do a search in public records at your local tax collectors office but storefronts with signage indicate a property owner interested in using the space. Be persistent once you make contact. Provide documentation of Art in Storefronts’ success. Let them know you’re easy to work with and have their interests in mind.

If you live or work in a neighborhood you may also know an under-utilized window, which could work as well, like an insurance or accounting office.

How do you establish the value of your art work for insurance purposes?

The best way to establish a set value of your artwork is to list out all your materials and hours of labor. Be sure to take ample photos of the work for your own record.

What have you found to be successful to light the art installations at night?

There is a huge benefit to lighting the storefronts so that the installations are visible at night. For several of the Chinatown sites, artists used simple spot lighting. Clamp lights with hoods were the most cost effective, easy to install, and efficient in lighting. The lights can also be placed on the floor to light upwards where needed.